Netis wrote, “While the cat was largely out of the bag, with management previewing its upcoming innovations on the recent earnings call, the market opportunity of $3 billion (by 2019), up from roughly $200 million this year, confirmed our beliefs of explosive growth in the hyper-scale data center optical networking market (with the bulk of alternative carrier/ICP spending concentrated there) and improving gross margin structure of the company (and industry in general) with packet capabilities increasingly embedded into optical transport platforms—something we have argued since our industry launch last year. With the 100G capacity upgrade cycle and packet-optical convergence in full bloom, robust short-term visibility, and solid long-term market fundamentals, we reiterate our bullish stance on the stock and anticipate future stock appreciation driven by continued upward revisions to revenue and earnings (two-thirds of the legacy 10G customer base is yet to migrate to 100G DTN-X). An adjacent metro opportunity, which management has bifurcated into metro cloud and traditional metro aggregation, opens a $7 billion market to Infinera, which the company plans to address with its unique and highly differentiated PIC technology (driving lower cost-per-bit) beginning in 2015 (based on the new CX platform) with growth accelerating in 2016 (new metro aggregation platform).”

Netis continued, “We believe the CX platform can contribute between $50 million and $100 million in 2015 (yielding top-line growth of 17% to 25%), surpassing current consensus expectations for growth of 11%. In terms of earnings power, we believe $0.45-$0.50 would be reasonable to assume at these growth rates (based on improving margins offset by slight growth in operating expenses) versus the current consensus estimate of $0.37. As we head into third-quarter earnings, we believe revenue estimates for the fourth quarter (usually a seasonally strong quarter for Infinera, with historical patterns pointing to sequential growth in a 4%-5% range) are appropriately handicapped, down 6% sequentially, discounting the risk of unusually strong activity from one customer (we believe CenturyLink (CTL) in the second and third quarters of this year. Rolling the upper-bound assumptions ($800 million in revenue and $0.50 in EPS in 2015) through our model represents a multiple of 1.5 times on EV/sales basis and 23 times P/E, which we view as attractive relative to its recent forward EV/sales multiple of 2.2 times and peak 2010 multiple of 2.8 times. The stock deserves a premium multiple relative to the peer group, in our view, based on its faster growth profile, expanding margins, and upward revisions to revenue and earnings.”

According to TipRanks.com, which measures analysts’ and bloggers’ success rate based on how their calls perform, analyst Dmitry Netis has a total average return of 3.2% and a 42.9% success rate. Netis is ranked #2009 out of 3304 analysts. 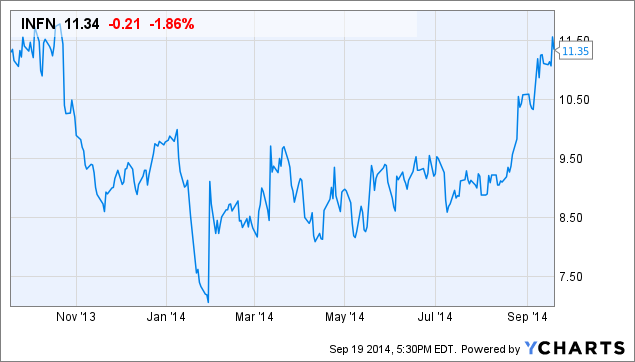