Imperial Capital analyst Bob McAdoo upgraded Hawaiian Holdings, Inc. (NASDAQ:HA) after the airlines released a note to investors before the market opened on March 25. McAdoo upgraded the stock from In-Line to Outperform and raised his price target from $24 to $27. He anticipates investors to flock back to the stock once more positive guidance is published.

Hawaiian Holdings' note to investors said that the company has been successful in "absorbing recent competitor capacity increases during the seasonably slower first quarter." McAdoo also believes that HA will continue to reap the benefits of lower fuel prices in addition to "meaningfully lower capex in 2015 and 2016." The analyst advises that investors should buy shares prior to the "seasonally stronger summer period."

The note to investors provided updated guidance for the 1Q15. HA expects total revenue to decrease year-over-year by 1.5% to 1.4%, which McAdoo notes is a "more modest decline than the 3.5% and 6.5% decline guided at the end of January and suggests the company has been successful in managing competitive capacity growth from the West Coast. 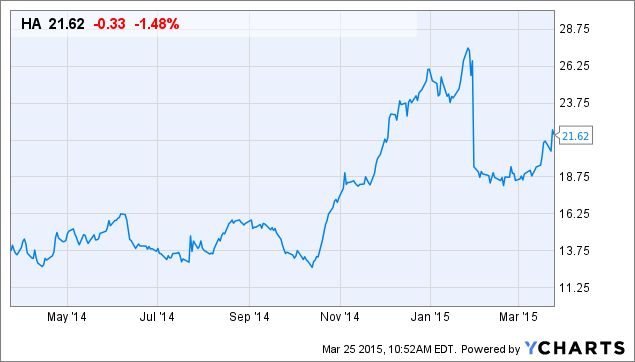