Imperial Capital analyst Bob McAdoo came out today with his views on American Airlines Group Inc (NASDAQ:AAL), following the company’s release of its first quarter results. The analyst maintained an Outperform rating, and reduced the price target to $82 (from $92). American Airlines shares are currently trading at $52.03, down $0.68, or 1.28%.

McAdoo noted, “Record first quarter operating results and management commentary continue to provide us with confidence in the company’s ability to build on 2014’s record results. Despite generating the highest 1Q15 pre-tax margins among the legacy carriers, American Airlines continues to trade at a significant discount to peers Delta and United.”

Furthermore, “While higher fuel costs and some additional currency headwind require that we lower our full year estimates, we still expect record 2015 pre-tax margins at American to surpass peers by a several hundred basis points. In addition, American’s no fuel hedging policy is expected to result in $4.35bn in annualized cost savings, the highest of any U.S. airline. We believe the company should pass a substantial portion of these cost savings on to investors in the way of additional share repurchases and the retirement of high interest debt.” 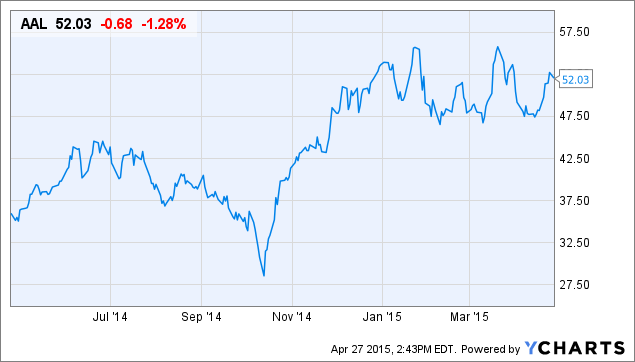