Hawaiian Holdings, Inc. (NASDAQ:HA) received set of praises from analysts at Imperial Capital in a research note released today. The research team, led by analyst Bob Mcadoo, upgraded HA to Outperform rating and raised the price target to $27 (from $24), which implies an upside of 20% from current levels. The increases come in response to the company's investor update, which was published prior to the market open yesterday.

Mcadoo noted that the update suggests Hawaiian has been successful in absorbing recent competitor capacity increases during the seasonally slower first quarter. The analyst continued, "Looking forward to seasonally stronger periods, competitive capacity growth appears manageable, with most new capacity coming in markets currently not served by Hawaiian. In addition to better revenue trends, the company should continue to benefit from lower fuel prices in 2015. The combination of fuel cost savings and meaningfully lower capex in 2015 and 2016 suggests capital return to shareholders is possible, albeit with further deleveraging rather than more direct methods."

Bottom line: "With shares of HA down 21% from their 52 week high of $27.66, we believe investors should accumulate shares ahead of the seasonally stronger summer period. Our $27 price target, while consistent with trading in recent weeks, is 23% above last session’s trading levels." 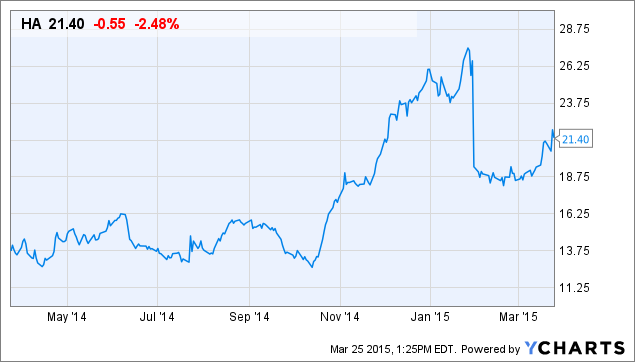