In a research report sent to investors today, Imperial Capital analyst Bob McAdoo maintained an Outperform rating on Delta Air Lines (NYSE:DAL) with a $69 price target, which represents a potential upside of 44% from where the stock is currently trading.

Mcadoo wrote, “Investor Day commentary outlines long-term operating goals and DAL’s belief, with which we concur, that the company should trade at multiples similar to other S&P Industrials. Within its Investor Day presentation on 12/11/14, Delta outlined its long-term operating and balance sheet goals. The company is targeting annual EPS growth of between 10% and 15%, consistent with consensus growth of 12% for other S&P 500 industrial companies. Operating margins should continue to be 11-14%, though we believe lower fuel prices could drive significantly higher operating margins in 2015.”

Furthermore the analyst wrote, “Long-term return on invested capital is expected to be between 15% and 18%, above the consensus estimate of 14.5% expected in 2014-2016 for DAL’s S&P industrial peers In terms of the balance sheet, management is targeting adjusted net debt of $5.0bn by 2016, down from $7.2bn adjusted net debt expected at year-end 2014. Per management, Delta has been the third best performing stock in the S&P 500 over the last two years and will have higher 2014 free cash flow than 85% of the S&P 500 Industrials. However, DAL shares currently trade at the second lowest P/E multiple of the group. Management believes, and we agree, that Delta’s trading multiple should converge with industrial peers over time.” 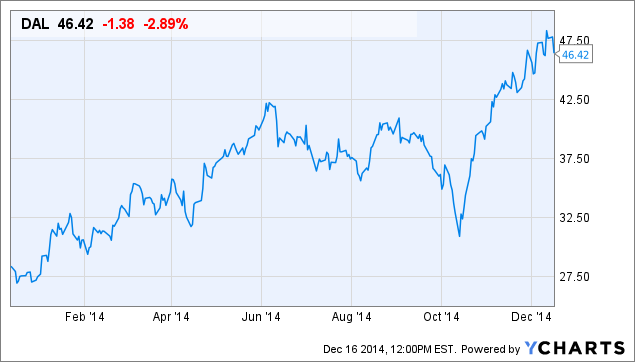