Imax: Stock Is Likely To Strengthen As Focus Turns To 2015, Says Canaccord

Galappatthige noted, “We have lowered our estimates for Q2 mainly due to a soft box office performance during the back-end of the quarter. This was clearly more industry-related than IMAX-related as IMAX indexed quite well for the key releases during the quarter. Thereby, we are now looking for a flat quarter, with adj EBITDA projected to be $32.7M, up only 1%. We estimate revenues will be down 5.4% to $77.8M; however, we do not include digital upgrades in our revenue estimates as that activity carries no meaningful margin”.

The analyst continued: “The bear thesis on IMAX is predicated on the view that this business has a flatter earnings trajectory than indicated by its screen growth, signings and backlog. This is based on the relatively modest EBITDA growth trajectory over the 2010-2013 period. In fact, if we include our F2014 forecast and calculate the EBITDA CAGR from 2010 to 2014, we get 4%. However, the reality is quite different. Variances in PSA and incremental layers of costs have essentially masked the underlying growth trajectory of the past four years. For instance, 2010 was an unusually strong film year where IMAX’s calculated PSA was $1.65M versus the norm of $1.1M. If we were to adjust the 2010 result for a normalised PSA, EBITDA would be closer to $70M. On that basis, we are looking for a $70M to $119M trajectory. Also it must be noted that, around 2010/2011, IMAX’s center of growth changed from North America to the international markets. This required additional investment. However, underlying all this was solid screen growth. Signings over the past 4 years averaged 180 annually, and the commercial screen count rose from 295 in Q1/10 to 707 by Q1/14. As we look to F2015 and F2016, we expect to see an earnings growth rate more representative of its screen expansion and the inherent operating leverage of the business model”. 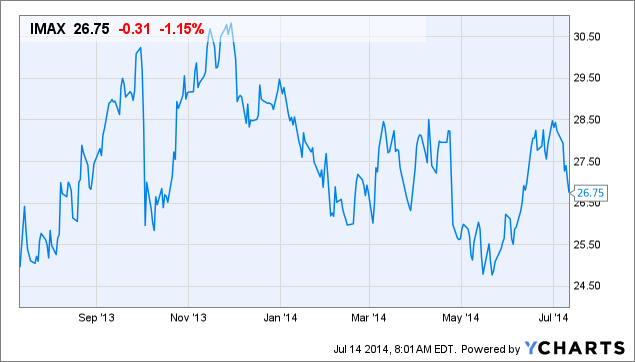