In reaction, William Blair analyst Mark Miller reiterated an Underperform rating on WMT and reduced his annual EPS estimates by $0.25. Miller wrote, “Doug McMillon’s job as CEO is not an easy one, and we do not envy the task of energizing store managers and associates when the numbers are tough. So the analogy provided today that Walmart can win with technology, data, and mobile—just as Supercenters drove reinvention at Walmart in 1996—is an inspiring idea, yet the reality appears to be that profits from large-format retail stores are sliding faster than the vision of being the best of the online and offline worlds can be realized.”

Furthermore, “We believe that the stepped-up investments are an outgrowth of that complexity and prior over-engineering. In our view, the e-commerce risks have only increased in the past year considering the rapid growth in Prime membership at Amazon and the marketplace fee streams that subsidize first-party transactions. With prospects for higher interest rates on the horizon, sector rotation away from retail could compound fundamental concerns that have only increased with second-quarter results.”

Out of the 21 analysts polled by TipRanks, 6 rate Wal-Mart Stores stock a Buy, 13 rate the stock a Hold and 2 recommend Sell. With a return potential of 18.8%, the stock’s consensus target price stands at $82.31. 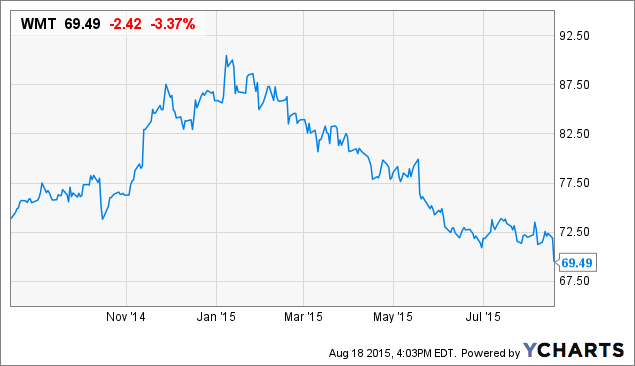