Here’s Why Valuation Around Seadrill Ltd May Remain Depressed

Canaccord analyst Alex Brooks weighed in today with a few insights on Seadrill Ltd (NYSE:SDRL), after the company announced the sale of the West Polaris to Seadrill Partners, its 58%-owned but non-consolidated subsidiary. The analyst reiterated a Sell rating on SeaDrill, with a price target of NOK70, which represents a potential downside of 23% from where the stock is currently trading.

Brooks observed, “Looking through the fog of numbers, we see that Seadrill is effectively selling an asset that generates EBITDA in excess of $150m in both 2016E and 2017E, for less than 5x that EBITDA; and the stock itself is trading at over 6x EBITDA. This is negative, as it simply means that the rest of Seadrill Limited (the rump) is now trading on an even higher multiple, and is generating less cash than before – even if its short term liquidity has been improved. We now estimate (Figure 3) that group net debt : EBITDA will peak at well over 6x, which is implausibly high.”

Furthermore, “We have updated our earnings forecasts for both the SeaMex transaction, Polaris and a slightly more bearish view on tax: the result is almost no change to our EPS for 15/16E. We are notably ahead of consensus EPS, we believe due to our estimate of associates profit (SeaMex and Partners).” 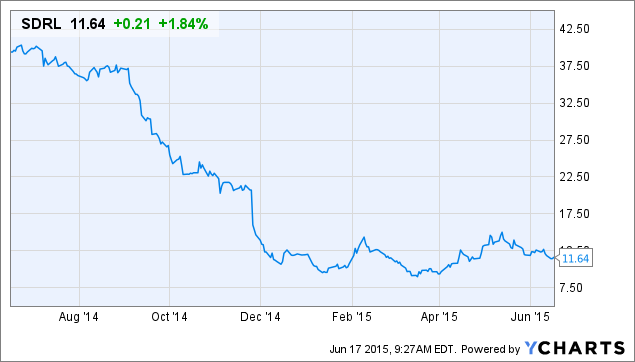