Here’s Why Valuation Around LinkedIn Corp (LNKD) May Remain Depressed

LinkedIn Corp (NYSE:LNKD) shares are tumbling more than 9% to $206.61 in mid-day trading, after the company released second-quarter earnings results, showing a 30% decline y/y in ad revenue (from a 10% decline in Q1), and updated guidance imply lowering FY core business expectations.

Subsequently, Brean Capital analyst Sarah Hindlian weighed in today with a pessimistic view on LinkedIn shares, reiterating a Sell rating with a price target of $172, which implies a downside of 17% from current levels.

Hindlian wrote, “LinkedIn reported another weak quarter, though headline results looked strong, masked by lynda.com. Further, lynda was moved from Premium Subscriptions to Talent Solutions, and as a result cons. and actuals are not comparable. The FY’15 (non-lynda) core business outlook was cut by ~35mn, signaling ongoing declines. The franchise Talent Solutions business ex-lynda contribution showed another quarter of deceleration, with growth down to 32% Y/Y in Q2’15, vs. 36% Y/Y in Q1’15 and an even steeper decline vs. 52% Y/Y growth in FY’14, bringing our saturation concerns into clear focus despite the company’s logical decision to move lynda.com into this segment.”

Furthermore, “ARPU in TS actually fell 1% Y/Y ex-lynda despite customer count growing, highlighting our belief that the high-end of the market is heavily saturated while companies like Glassdoor are starting to gain share. Premium Subscriptions also lagged as Sales Nav. failed to materialize, while Marketing faces secular headwinds in Display. We remain concerned on weakness in the back half, premium valuation, and declining profitability and we reiterate our Sell rating.”

Out of the 31 analysts polled by TipRanks, 23 rate LinkedIn Corp stock a Buy, 7 rate the stock a Hold and 1 recommends Sell. With a return potential of nearly 24%, the stock’s consensus target price stands at $254.63. 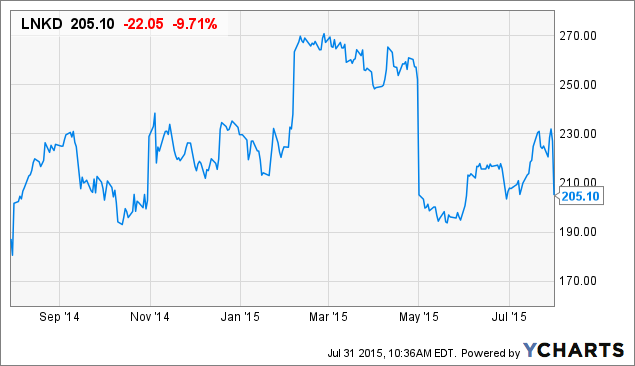