Amusa noted, “We believe MDCO/ALNY data and clinical plans are interesting and highlight unrated MDCO as a preferred investment over ESPR in the cholesterol market, while the market awaits further disclosure in the second half of September on ESPR’s phase III program. Indeed, MDCO’s market cap of $2.3bn (vs ESPR of $1.2bn) to us makes MDCO a more compelling investment than ESPR, as we believe the value in MDCO’s ALN-PCSsc is likely >2x the value of ESPR’s ETC-1002, with MDCO having over 10 other clinical products in its portfolio to further contribute to valuation, versus 0 for ESPR.”

The analyst continued, “MDCO and partner ALNY announced 83% maximal and 64% mean LDL-cholesterol (LDL-C) lowering for ALN-PCSsc, when tested in patients on or off statins, in a phase I trial presented at the ESC Congress. The results were notably durable, lasting 140 days, which supports once-quarterly and possibly bi-annual subcutaneous dosing, compared to the twice-monthly dosing for PCSK9 inhibitors (Praluent and Repatha). There were no clinically significant drug-related adverse events reported. The companies expect to start a phase 2 study at end-2015, with a phase III study due to start by end-2017.”

Out of the 8 analysts polled by TipRanks, 7 rate Esperion Therapeutics stock a Buy, while 1 rates the stock a Sell. With a return potential of 124.2%, the stock’s consensus target price stands at $117.75. 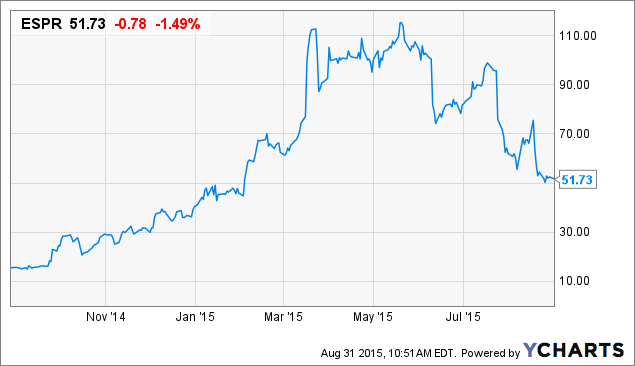