Roth Capital analyst Joseph Pantginis weighed in with a few insights on Vascular Biogenics Ltd (NASDAQ:VBLT), after the Israeli biotech company presented updated data from its Phase II study of VB-111 in rGBM and Phase I/II study in ovarian cancer. Median OS in rGBM patients on combination of VB-111 and Avastin reached 16 months, which compares favorably with historical controls at 8 months.

Pantginis observed, “We’re encouraged by the data to date in the Phase II rGBM study with the mOS now reaching 16 months, which is higher than established historical controls with Avastin monotherapy. We believe the Phase III study, which includes a stringent discontinuation decision process, is well designed.” Furthermore, “With SPA expected, study design, statistical analyses and endpoints are agreed upon with FDA and we believe there is potential for accelerated approval should the interim analysis at 91 events indicate a survival benefit for the combination arm.”

Furthermore, “With regards to the ovarian cancer study, these are early-stage data in 16 patients, which show early signs of efficacy in the form of stable disease and reduction of the CA125 marker. However, similar to the approach in rGBM, VB-111 may require an additional targeted therapy to exert its optimal efficacy in this disease setting, such as Avastin, recently approved based on the AURELIA study.”

The analyst reiterated a Buy rating on Vascular Biogenics shares, with a price target of $13, which represents a potential upside of 59.5% from where the stock is currently trading. 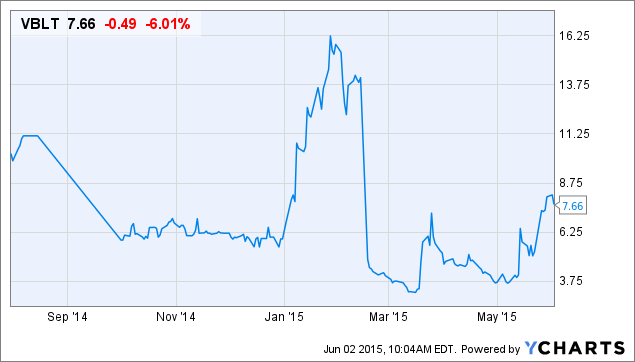 This Analyst Presses the ‘Buy’ Button on Vascular Biogenics (VBLT) Stock; Here’s Why