Piper Jaffray’s healthcare analyst Joshua Schimmer weighed in today with a favorable report on Celgene Corporation (NASDAQ:CELG), raising the price target to $160 (from $147) and reiterating an Overweight rating on the stock. The new price target implies an upside of 19% from where CELG is currently trading. The increased price target reflects strong second-quarter performance/guidance and addition of ozanimod.

Schimmer wrote, “As we pass the midway point of 2015, we’re refreshing our thinking on our coverage universe. For CELG, recent pre-announcement of 2Q results along with the acquisition of RCPT has driven recent share strength and the company continues to set the pace for strategic M&A and partnering, steps that would also benefit our other large cap biotech companies such as AMGN, GILD and BIIB. Aggressively leveraging its balance sheet to create LT revenue and earnings opportunities to offset Revlimid’s eventual patent cliff is paying dividends with share performance.”

The analyst concluded, “While the rest of 2015 is likely to be fairly quiet, steady earnings growth and operational execution should further drive upside to CELG shares as it represents one of the most attractive PEG ratios in biotech.” 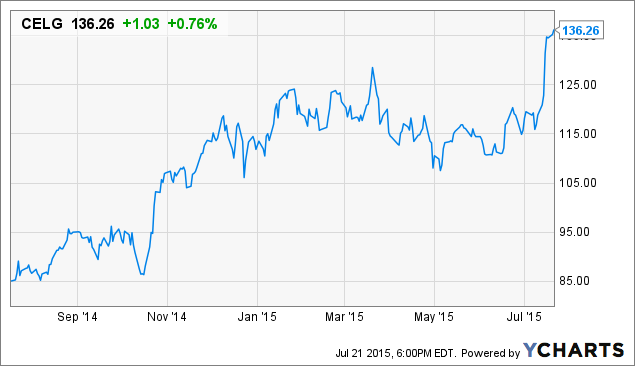