Oncothyreon Inc (USA) (NASDAQ:ONTY) shares have taken off, adding 24.56% to trade at $4.26, after the biotechnology company presented positive study data for its breast cancer treatment at the American Society of Clinical Oncology 2015 meeting.

However, the stock appears to be fully valued, according to Cantor analyst Mara Goldstein. As such, the analyst reiterated a Hold rating on the stock with a $4.00 price target, which reflects a potential downside of nearly 7% from the stock’s current trading price.

Goldstein noted, “Data from ONT-380 is emerging suggesting that the drug has utility in the treatment of HER2+ breast cancer, and this is resetting the company’s valuation, of which we are supportive. But with the shares approaching our price target of $4, the company’s dependence on this asset and the potential for additional financing, we think the shares are reasonably valued.”

“We think the shares could be worth $4 based on discounted revenue calculation of ONT-380, or $3.00 per share, which includes a 10x multiple on peak revenues (and a 35% discount rate) plus the value of the company’s cash balance, just under $1.00 per share. With the shares moving toward this PT, and ASCO results working their way into the shares, our rating remains HOLD.”, the analyst added.

According to TipRanks.com, which measures analysts’ and bloggers’ success rate based on how their calls perform, analyst Mara Goldstein has a total average return of 17.2% and a 70.6% success rate. Goldstein is ranked #223 out of 3610 analysts. 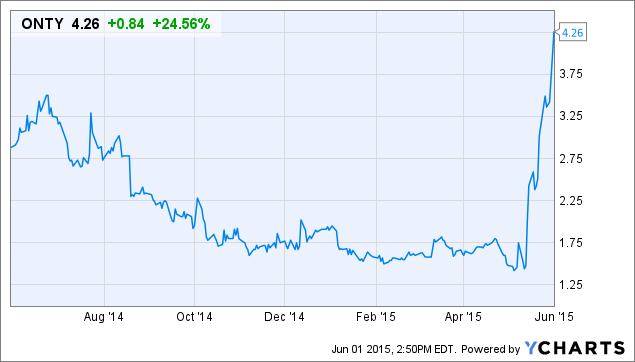