In a research report released earlier today, Cantor analyst Mara Goldstein maintained a Buy rating on shares of Celldex Therapeutics, Inc. (NASDAQ:CLDX), but reduced the price target to $31 (from $38), following the company’s second-quarter update, in which the company disclosed that the BLA filing for Rintega, the Company’s therapeutic vaccine for the treatment of patients suffering from EGFRvIII-positive, recurrent glioblastoma, is not likely until the completion of ACT IV, the Phase 3 registration study in newly diagnosed patients with GBM.

Goldstein wrote, “With a BLA filing for Rintega not likely until the completion of ACT IV (interim review late 2015/early 2016), we expect Celldex shares to trade off. And while we have lowered our PT to reflect the change in timing, we still like the shares. Rintega’s data has been strong overall thus far, and the company has a portfolio of mid-to-late stage assets that we find compelling, as well as considerable cash resources ($300+ million). We think that this overhang will recede over time, particularly as data for other candidates (i.e., varlilumab) become visible. We maintain a BUY on the shares, even in the wake of share-price weakness.”

The analyst continued, “While we had anticipated that Rintega could be on the market in mid-2016 in the relapsed setting, by waiting for the ACT IV trial data, Rintega will be considered for all EGFRvIII patients (newly diagnosed and relapsed) upon approval. This is likely to make a stronger launch than would have occurred with approvals separately. It does, however, place greater risk as we believe a negative outcome for ACT IV would preclude an approval in the relapsed setting without additional data.”

All the 7 analysts polled by TipRanks rate Celldex Therapeutics stock a Buy. With a return potential of 117.2%, the stock’s consensus target price stands at $36.86. 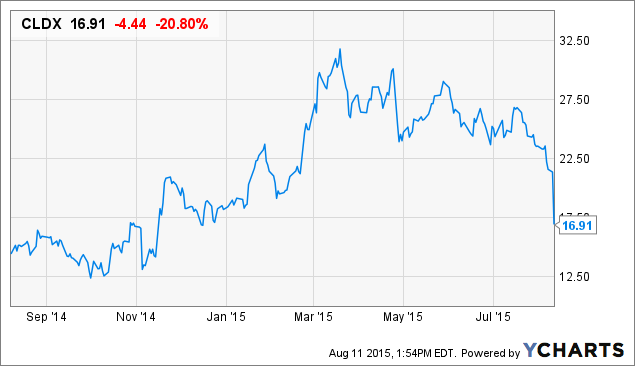