Stratasys, Ltd.’s (NASDAQ:SSYS) price target has been reduced at Canaccord by research analyst Robert Burleson from $51 to $45, which implies an upside of 16% from current levels. The decreased price target was in response to the company’s preannouncement for Q1 and lower 2015 outlook. The analyst rates the stock a Hold.

Burleson observed, “Management confirmed weak demand in the US, footing with reseller feedback referenced in our downgrade Monday and our April 14th note “Slow start in transition year.” Based on our expectations for slower long-term growth, we believe more estimate cuts could be forthcoming, especially with potentially lower rates of materials consumption on the heels of stalling systems demand.”

“The disappointing Q1 results for the core business are attributed to numerous factors including: a decline in capital spending across multiple regions and industries in particular within North America, the negative FX impact, a slower than expected sales ramp among several channel partners due to increased M&A, slower than anticipated adoption for SSYS’s high-end Connex platform and delays in customer purchases following the introduction of 8 additional Connex portfolio products in 2H/2014 and a slower than anticipated channel ramp within portions of Asia Pacific and Japan. Results were also effected by lower gross margins due to an unfavorable product mix.”, the analyst added. 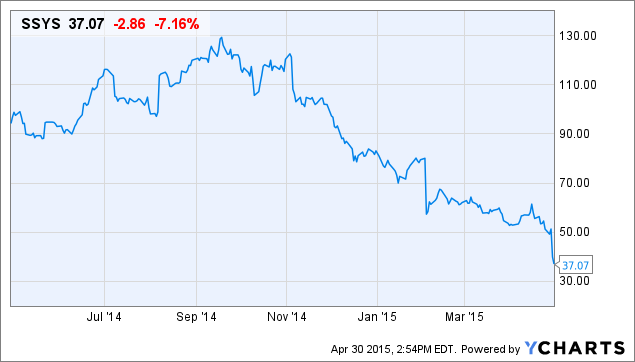