In a research report issued this morning, Brean Capital analyst Difei Yang maintained a Buy rating on shares of Zogenix, Inc. (NASDAQ:ZGNX) and raised the price target to $28 (from $20), after the company hosted a KOL meeting yesterday that was well received. That said, Zogenix shares gained more than 30% leading up to yesterday’s meeting.

Yang wrote, “The meeting was divided into three sections: 1) Dr. Joseph Sullivan who is a Director at UCSF Pediatric Epilepsy Center and Associate Professor of Neurology & Pediatrics University of California, San Francisco, gave an overview of the disease state, disease incident and prevalence, symptoms, diagnosis, current treatment options and limitations; 2) Lieven Lagae from Paediatric Neurology University Hospitals KULeuven Belgium gave an in-depth overview of the clinical study he has conducted over many years in treating Dravet patients with low dose fenfluramine; and 3) there was a presentation from management which included an update from recent positive FDA interactions. Management guided for filing an IND by the end of August and re-affirmed earlier guidance to initiate two Phase III trials during Q4, 2015.”

The analyst explained her new price target noting, “We revisited the assumptions we used to derive TP for ZGNX shares and thought some of the assumptions were too conservative, e.g., operating income margin for an orphan disease company like ZGNX. We had used the assumption of 35% which is in line with most of other specialty pharma companies, but lower than that for orphan drug companies, which typically is in the 50% range. In addition, we believe because of the strong long-term clinical data on ZX008 as well as the fact that orphan drugs appear to have better R&D successes due to their highly targeted patient population, there is a lower efficacy bar due to lack of an alternative therapy. We revised our success rate for the pending pivotal trials from 70% to 80%.”

According to TipRanks.com, which measures analysts’ and bloggers’ success rate based on how their calls perform, analyst Difei Yang has a total average return of 25.6% and a 62.3% success rate. Yang has a 60.1% average return when recommending ZGNX, and is ranked #126 out of 3708 analysts. 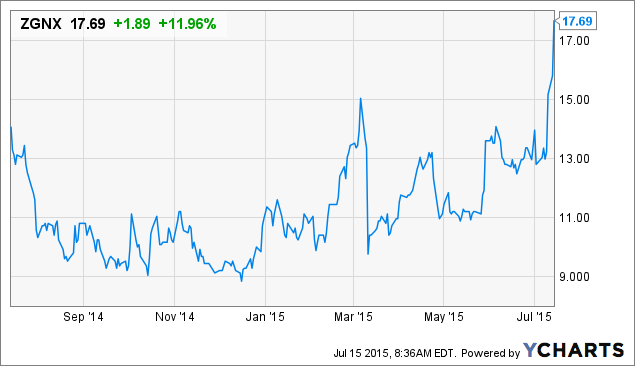