In a research report issued today, Axiom analyst Victor Anthony significantly reduced the price target for LinkedIn Corp (NYSE:LNKD) to $230 (from $300), while maintaining a Buy rating on the stock. The decreased price target comes after the company reported weak outlook for the second-quarter, while first-quarter results were in line. In reaction to the news, LinkedIn shares closed today at $205.28, down $46.85 or 18.58%.

Anthony commented: “Just when we thought we were done with negative surprises this earnings season, LinkedIn stepped in with another. 1Q15 results were relatively in line. However, full year Adjusted EBITDA guidance was 23% below consensus. The guide down was due to accounting for the Lynda.com integration, an unanticipated negative impact from the sales force transition, and weakness in display revenues. The latter is our only fundamental concern, one that appears to be industry-wide, and is likely a challenge to reverse.”

“LNKD does have a potential offset in a performance-based ad unit, but until it becomes big enough, display will weigh on results. While the guidance was surprising, it has not shaken our belief in the strength of LNKD’s business model. As such, we are maintaining our Buy rating but cut our price target to $230 from $300 on reduced estimates. For Investors who missed the last leg up in the stock, the pullback creates and opportunity to revisit the story.”, the analyst added. 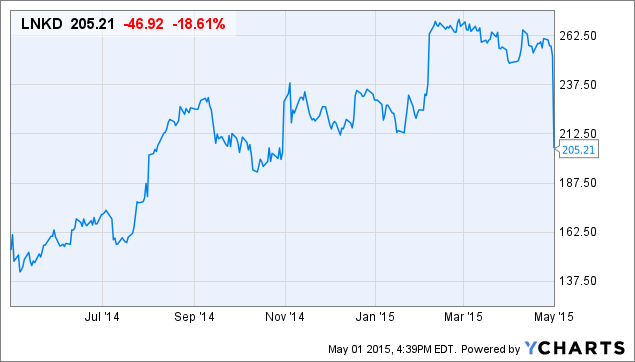