Wedbush analyst Michael Pachter weighed in today with his prediction on Pandora Media Inc (NYSE:P), as the company will report second-quarter results after the market close on Thursday, July 23, and host a conference call at 2:00 PM PT.

According to the analyst, the local advertising mix will likely drive revenue and signs of operating leverage keeps him positive. However, Pachter believes that investors remain focused on the outcome of the CRB rate determination, expected late this year. The analyst wrote, “We believe that Pandora has the better side of the argument in its royalty hearing, and expect the CRB to set rates closer to Pandora’s case for fair market value. The market has discounted Pandora shares in the belief that its royalty structure will increase materially; we do not share that view, and believe that should the CRB ruling be adverse, Pandora has significant leverage to negotiate favorable rates directly with the record labels.

The analyst concluded, “Pandora users should grow, despite competition and seasonality, and we think it appropriate to value the company based on its number of users. We assign a 10x multiple to our $7 operating profit per user per year, and arrive at a value per user of $70.”

The analyst reiterated an Outperform rating on Pandora stock with a price target of $27, which represents a potential upside of 91% from where the stock is currently trading.

Out of the 29 analysts polled by TipRanks, 20 rate Pandora Media Inc stock a Buy, 8 rate the stock a Hold and 1 recommends Sell. With a return potential of 65.7%, the stock’s consensus target price stands at $23.44. 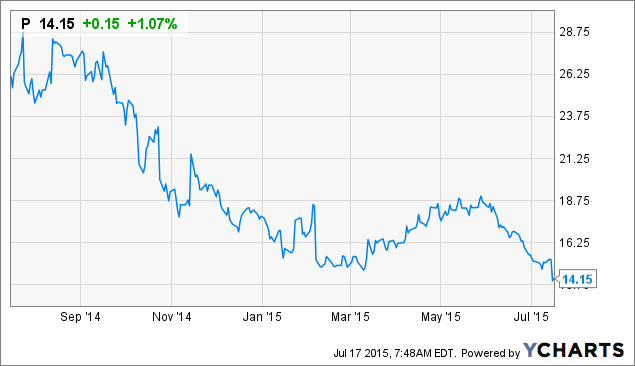