In a research report published Wednesday, Argus analyst Stephen Biggar downgraded shares of First Solar, Inc. (NASDAQ:FSLR) from Buy to Hold, while lowering the 2017 EPS estimate of $4.35 to $2.50, on the back of concerns about the company’s declining project backlog and the impact of intense price competition.

Biggar noted, “In 2016, the company’s results have benefited from a rush to complete solar projects ahead of the expected expiration of U.S. tax incentives. However, with these incentives now extended through 2019, customers have less urgency to complete projects. As a result, the backlog has fallen, reducing earnings visibility and prompting us to lower our 2017 EPS estimate.”

“We expect 2017 to be more challenging for FSLR as it transitions from the Series 4 to the Series 5 module, and as lucrative legacy contracts roll off. Management expects the Series 5 module to generate 1 gigawatt of capacity next year, with about 2 gigawatts still coming from the Series 4. It looks for margin expansion to resume in 2018-2020 as the company captures the full value of its new modules,” the analyst added.

According to TipRanks.com, which measures analysts’ and bloggers’ success rate based on how their calls perform, analyst Stephen Biggar has a yearly average return of -0.7% and a 62.5% success rate. Biggar is ranked #2874 out of 4129 analysts.

Out of the 21 analysts polled by TipRanks, 11 rate First Solar stock a Hold, while 10 rate the stock a Buy. With a return potential of 56%, the stock’s consensus target price stands at $59.09. 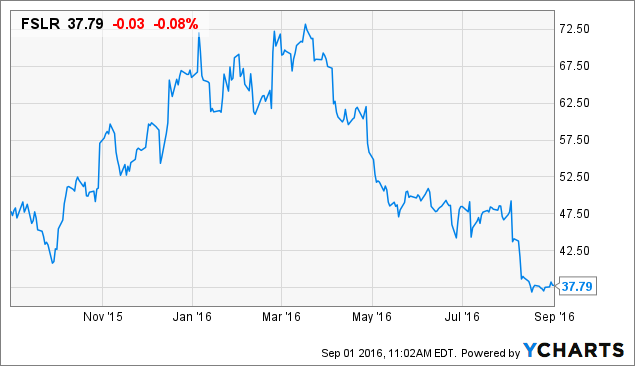