Herbalife Ltd. (HLF) Price Target Raised by 19% at Canaccord Ahead of Earnings

In a research report released today, Canaccord Genuity analyst Scott Van Winkle maintained a Buy rating on Herbalife Ltd. (NYSE:HLF) and raised the price target to $50 (from $42), as the company is scheduled to report its first-quarter earnings results after the close on May 5th.

Winkle noted, “The Q1 results, particularly how the quarter closed, should provide better clarity to the impacts of a suite of changes to the company’s marketing plan. Volume declines in several key markets are fully expected, but the magnitude of such changes as the full implementation of first order limitations (previously limited to about 18 markets) and debut of a new policy mandating qualifying purchases direct from Herbalife will be the key insights. Only the change from the traditional 5K/12-month qualification for sales leaders to 4K should have impacted Q4 when it was introduced in November.”

Furthermore, “Given a broad recovery of valuations across the direct selling sector, where the average forward PE has nearly reverted to the historical mean, we are raising our PE target to 11.25x from 10x, now reflecting just a 10% discount to HLF’s average forward PE. We have also rolled our target forward onto our new 2016 EPS estimate of $4.45.” 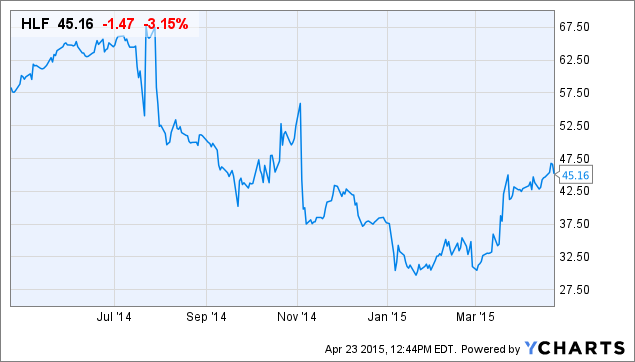