Benjamin wrote, “While the company is planning to appeal the decision, in our opinion, the ruling is a clear disappointment for investors because it could accelerate the entry of generic competition. However, we remind investors that Fusilev is still protected by orphan drug exclusivity until 2018 as a treatment for patients with colorectal cancer (CRC). Even though the osteosarcoma orphan exclusivity is set to expire next month, we believe that the combination of a citizen’s petition filed to the FDA, the challenges of launching at risk during the appeal process, CRC exclusivity described above, and the strong relationships the company has been able to secure with hospitals and community physicians should keep Fusilev revenues protected into 2018.”

Therefore, “We continue to project approximately $97 MM in Fusilev sales for 2015 and remind investors that Spectrum boasts a broad portfolio, with CE-melphalan potentially joining the company’s list of marketed oncology products including Fusilev, Folotyn, Marqibo, Zevalin, and Beleodaq later this year. With a diverse pipeline of assets in clinical development, and approximately $141 MM in cash (pro forma), we believe Spectrum remains an undervalued player with significant upside for the long-term investor.”

According to TipRanks.com, which tracks and ranks over 3,500 financial analysts to gauge the performance of their past recommendations, analyst Reni Benjamin has a total average return of 2.7% and a 39.8% success rate. Benjamin has a -4.1% average return when recommending SPPI, and is ranked #1500 out of 3480 analysts. 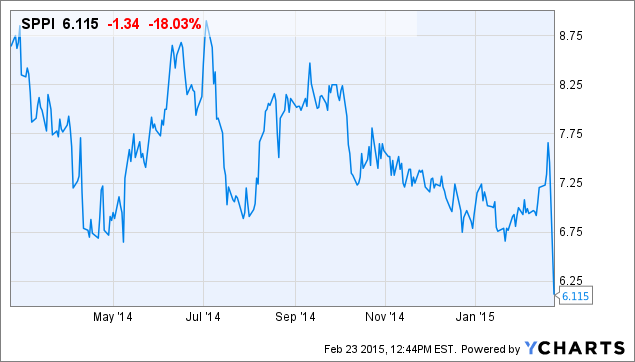