H.C. Wainwright analyst Swayampakula Ramakanth came out with a few insights on AEterna Zentaris Inc. (USA)  (NASDAQ:AEZS), after the company released its fourth-quarter results last Monday. The analyst also reiterated a Neutral rating on the stock. AEterna Zentaris shares are currently trading at $0.57, down $0.02 or 3.73 percent.﻿

Ramakanth noted, "Aeterna Zentaris began co-promoting ASCEND’s Estrogel in late 2014. According to management, the 19 sales representatives have completed training, and customer sampling initiated in 4Q14. We believe sales have started in mid-1Q15, and management is pleased with the market response. As commission payments are received with a one-quarter lag, we believe the first Estrogel-releated revenues could be reported in 2Q15, and the first full quarter of sales could potentially be reported in 3Q15."

Furthermore, "Although we believe Estrogel has launched well in the company’s territories, we maintain our neutral rating due to lack of insight into: 1) the strength of the Estrogel launch; 2) the ZoptEC study data; 3) Macrilen development timelines; and 4) the potential market of the yet-to-be licensed product. However, based on the experience of the management, we are confident that the company could build a successful commercial network." 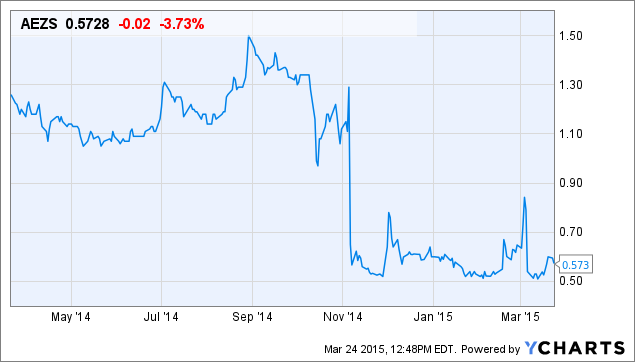