In a research report issued this morning, H.C. Wainwright analyst Reni Benjamin reiterated a Buy rating on Pluristem Therapeutics (NASDAQ:PSTI) with a $4.00 price target, following an update from Pluristem’s management on the progress of several PLX-PAD programs and PLX-R18 (formerly PLX-RAD), which is being evaluated as a treatment for improving restoration of hematopoiesis in patients who have been subjected to myeloablative chemotherapy or have been exposed to acute, high doses of radiation.

Benjamin noted, “Based on our conversation with management, we believe the PLX-PAD cardiovascular programs remain the primary value drivers with the potential to announce an Asian and/or European CLI partnership in 2015 and the potential to complete enrollment of a 150-patient IC trial by mid-2015. Additionally, the company announced positive 12- month safety data from its orthopedic program and updated six-month efficacy data indicating PLX-PAD offers a significant systemic benefit in patients who have undergone hip replacement surgery.”

“The analyst continued, “Given the company’s successful history of forging partnerships to offset developmental costs, a manufacturing process that has been approved for pivotal trials by the FDA and other regulatory agencies, and a cash position of $45.5 MM (pro forma), we believe Pluristem Therapeutics represents an undervalued player with upside for the long-term investor.”

Pluristem Therapeutics Inc., through its subsidiary, Pluristem Ltd., operates as a bio-therapeutics company in Israel. 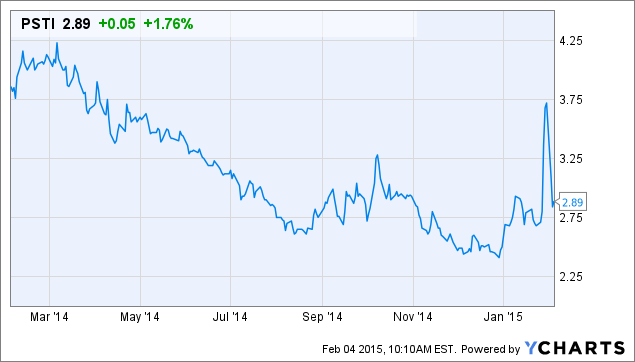