Benjamin wrote, “OncoSec reported a net loss of ($3.5) MM, or ($0.02) per share for the fourth quarter ending on July 31, 2014, in line with our expectations. Going forward, we expect the burn rate to increase to approximately $3.8 MM per quarter as trial enrollment grows and a new combination study evaluating ImmunoPulse with checkpoint inhibitors is potentially initiated. Based on our models and guidance from management, we expect the current cash position to sustain operations for at least the next two years.”

The analyst continued, “OncoSec’s ImmunoPulse platform utilizes electroporation to efficiently transfect plasmid DNA encoding the pro-inflammatory cytokine, IL-12, into patients with injectable tumors including melanoma, Merkel cell, and cutaneous T-cell lymphoma. With the approval of Bristol- Myers Squibb’s (BMY; not rated) Opdivo (nivolumab) in Japan and Merck’s (MRK; not rated) Keytruda (MK-3475) in the US, the age of improving response rates of checkpoint inhibitors has begun. With ImmunoPulse, OncoSec aims to change the tumor microenvironment by locally expressing IL-12 in tumors, which could systemically increase the potency of checkpoint modulators. With multiple upcoming presentations, the potential for a partnership, and a strong cash position of $37.9 MM, we believe OncoSec represents an undervalued player with significant upside for the long-term investor.” 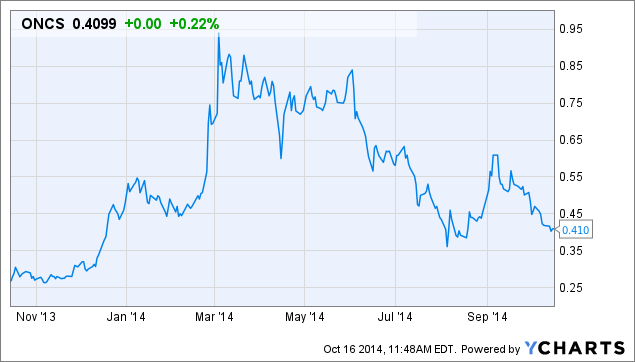