In a research note released yesterday, H.C. Wainwright analyst Andrew Fein reiterated a Buy rating on Threshold Pharmaceuticals (NASDAQ:THLD) with a $12 price target which represents a 264% upside from where the stock is currently trading.

Fein wrote, “Although the sarcoma program is scheduled to take a first shot at clinical and commercial success (data in 1Q16), it is the close-following pancreatic cancer program (data later in 2016) that unlocks greater value ($250M vs. $1.5B), while also in our view having even higher probability of success. Importantly, while THLD and its partner Merck continue to invest on the wide potential of TH-302 beyond STS and PC, we believe that the current trading levels of THLD shares offer a discount even to a base scenario of success consisting of: (1) launch of TH-302 in the STS and PC indications only; (2) conservative probability of success (60% for STS, 75% for PC); and (3) commercialization of TH-302 by Merck KGaA and revenues to THLD based on a royalty model only. Success in STS and/or PC, expansion into additional indications (such as NSCLC, GBM, or MM), and election by THLD to exercise its option to co-commercialize TH-302 with Merck KGaA in the US, would provide significant upside to our estimates and price target.“

According to TipRanks.com, which measures analysts’ and bloggers’ success rate based on how their calls perform, analyst Andrew Fein has a total average return of 9.8% and a 48.7% success rate. Fein has a -20.2% average return when recommending THLD, and is ranked #719 out of 3386 analysts. 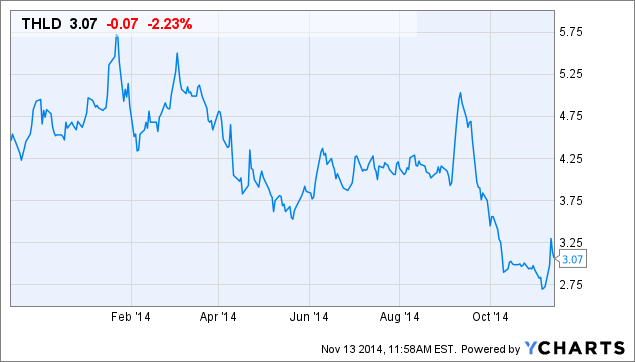