Benjamin wrote, “A major highlight of the third quarter was Spectrum’s decision to advance SPI-2012, a long-acting granulocyte colony-stimulating factor (GCSF), into Phase 3 clinical trials after achieving positive Phase 2 results. Spectrum currently boasts a portfolio of five marketed oncology products, including: Fusilev, Zevalin, Folotyn, Marqibo, and most recently, Beleodaq. With approximately $148 MM in cash and a diverse pipeline of assets in clinical development, we believe Spectrum represents an undervalued player with significant upside for the long-term investor.”

The analyst continued, “We view the decision to continue SPI-2012 development as great news for the company and investors alike as management targets chipping away at Amgen’s (AMGN; not rated) lucrative $3.5 billion (US sales in 2013) franchise. With relatively high neutropenia US prevalence rates and pegfilgrastim pricing exceeding $11,000 per patient, the potential US market for SPI-2012 exceeds $1 billion. Spectrum hopes to begin Phase 3 registration trials in 2015 after meeting with the FDA to discuss study designs before the end of 2014.” 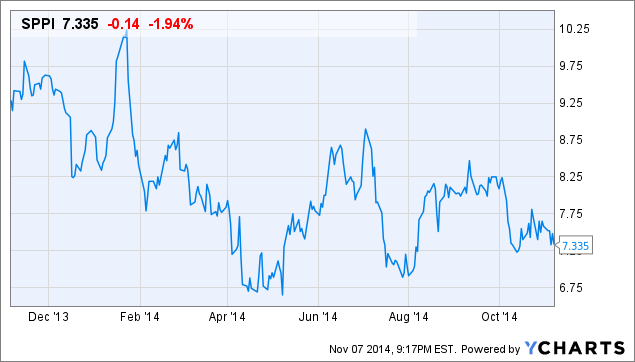