Fein noted, The question now, of course, is: how big might this lump sum payment be? In the ruling, the Court noted the usefulness of the “Baliban model” offered through expert witness testimony by PIP. In the course of his testimony, Baliban put forth six different scenarios using discounted future cash flows. Of the six scenarios offered, the Court decided that “the Basis 1 LATS (License Agreement Term Sheet) Scenario” was most relevant as it calculated PIP’s damages based upon facts that were known at the time of the original contract breach (December 2006). Per the Court’s ruling, “Using that scenario, Baliban calculated PharmAthene’s expectation damages to be $1.07 billion.” Several assumptions went into the calculation of this $1.07 billion value, including: (1) from 2008 to 2017, PIP would have sold approximately 91.9M courses of ST-246 at a price of $100 per course (with an annualized price increase of 3%); (2) an 84% risk adjustment to PIP’s projected earnings to account for the potential that PIP would not be successful in commercializing ST-246; and (3) a discount rate of 23.1% to PIP’s risk adjusted earnings to arrive at an NPV of PIP’s lost profits. In handing down its decision, the Court requested the following adjustments to the Baliban model be made: (1) decreasing the timeframe used in the model from the period 2006-2017 to the period 2006-2014; (2) altering the timing of the first sale from 2008 to 2010; (3) altering the quantity of drug sold to 14,903,245 courses; (4) altering the distribution of sales to assume that all sales occurred in 2010, but that they were distributed equally over a five year period; (5) the following upfront and milestone payment assumptions ($16M in total): a) $2M upfront paid in 2006, b) $2.5M deferred license fee paid in 2007, c) post financing in excess of $15M fee of $1.5M paid in 2007, d) $2M NDA approval fee paid in 2007, e) $3M fee for sales to the U.S. Government in excess of $50M (payment year tbd), f) $2M for sales in excess of $200M (payment year tbd), g) $2M for EMEA approval in 2009, h) $2M for Japanese approval in 2009; 6) revising COGS to 14%. Within 10 days, Baliban must incorporate the changes outlined above and provide a copy of the new model to both parties as well as the Court. The Court also noted that PIP is entitled to “pre and post-judgement interest at the legal rate, compounded quarterly.” We understand this presumed interest rate to be equal to approximately 11.25%. When all of these assumptions are taken in totality, we believe the lump sum payment to PIP has the potential to near $350M, or in excess of $6/share.”

According to TipRanks.com, which measures analysts’ and bloggers’ success rate based on how their calls perform, analyst Andrew Fein has a total average return of 5.0% and a 59.1% success rate. Fein has a -35.8% average return when recommending PIP, and is ranked #1247 out of 3219 analysts. 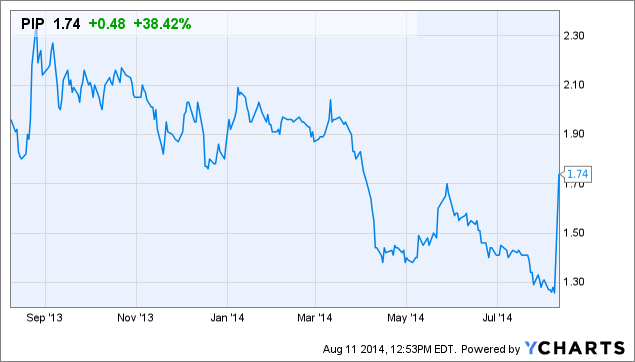