In a research report released this morning, H.C. Wainwright analyst Reni Benjamin reiterated a Buy rating on Oxigene (NASDAQ:OXGN) with a $6 price target, following the Gynecologic Oncology Group’s presentation of interim data from the ongoing study of Zybrestat combined with Avastin versus Avastin alone in patients with recurrent ovarian, tubal, and peritoneal cancer.

Benjamin wrote, “The combination showed a significant PFS benefit relative to Avastin alone (PFS=7.3 vs. 4.8 months; p=0.049). Importantly, a subset analysis (n=27) of patients with Pt-resistant cancer revealed an impressive relative improvement (PFS=6.7 vs. 3.4 months; p=0.01, HR=0.57). Given the difficulty associated with treating Pt-resistant ovarian cancer, we view this announcement as excellent news because the combination of a vascular disruptive agent with an anti-angiogenic agent may ultimately prove to safer than Avastin + chemotherapy, which also extends PFS (6.7 vs. 3.4 months; p<0.0001). A November 19 PDUFA for Avastin + chemotherapy in Pt-resistant ovarian cancer is pending. In our opinion, if the combination is approved despite a lack of an OS benefit, the precedent could open a window of opportunity for Zybrestat + Avastin to follow suit. With several trial readouts expected in the next year, a pipeline of clinical and pre-clinical oncology assets, and a cash position of $36.3 MM (pro forma), we believe OXiGENE represents an undervalued player with significant upside for the long-term investor.” 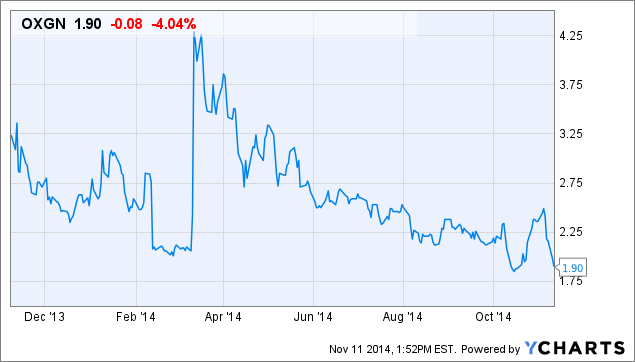