In a research note published this morning, H.C. Wainwright analyst Reni Benjamin reiterated a Buy rating on OXiGENE (NASDAQ:OXGN) with a $6 price target, following the company’s release of its third-quarter results.

Benjamin wrote, “OXiGENE’s lead drug candidate, ZYBRESTAT (fosbretabulin), is a Vascular Disrupting Agent (VDA) currently in Phase 2 development in ovarian cancer and the company is seeking guidance from the EMA regarding the completed trial in anaplastic thyroid carcinoma (ATC). With important clinical data from several ongoing studies to be announced in the next 12 months, the potential for a corporate partnership, and $32.9 MM in cash, we believe OXiGENE represents an undervalued player with significant upside for the long-term investor.”

The analyst continued, “Several catalysts investors should watch for include: (1) guidance on the likelihood of the EMA accepting a MAA under Exceptional Circumstances for ZYBRESTAT in ATC; (2) guidance on a registrational pathway for ZYBRESTAT in ovarian cancer; and (3) the potential to report clinical trial results from 3 separate and distinct studies in 2015.” 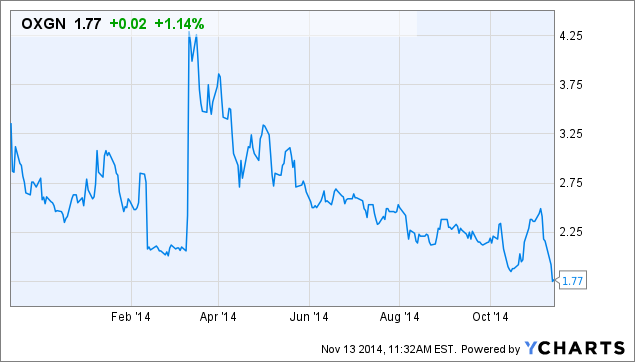