In a research note published today, H.C. Wainwright analyst Andrew Fein reiterated a Buy rating on OvaScience (NASDAQ:OVAS) and increased his price target to $40 (from $16), as the company reported that the it has already surpassed its target range of AUGMENT cycles currently being administered in three ex- US geographies.

Fein wrote, “We believe that this topline metric, no matter how preliminary, bodes well for the expected slow rollout of AUGMENT in 2015, which will effectively convert OVAS into a commercial company. As this current beta-testing transitions into a controlled commercial rollout next year, we believe that the following will represent key variables with read through on commercial success: (1) cycle pricing; (2) target geographies (current testing sites and future commercial sites); (3) target population (e.g. women who have failed a certain number of prior IVF cycles, and/or IVF-naïve women); and (4) eventual fertilization rate and birth rate (vs. clinic- or geography-matched standard). We believe that at least some indicators for the above variables may begin to trickle in as AUGMENT moves into a full commercial rollout next year, and will help better frame the commercial opportunity beyond the simple size of the ex-US IVF market which, in our view, is sufficiently large to support valuation of a multiple of current trading levels.”

According to TipRanks.com, which measures analysts’ and bloggers’ success rate based on how their calls perform, analyst Andrew Fein has a total average return of 8% and a 43.2% success rate. Fein has a 165.7% average return when recommending OVAS, and is ranked #904 out of 3384 analysts. 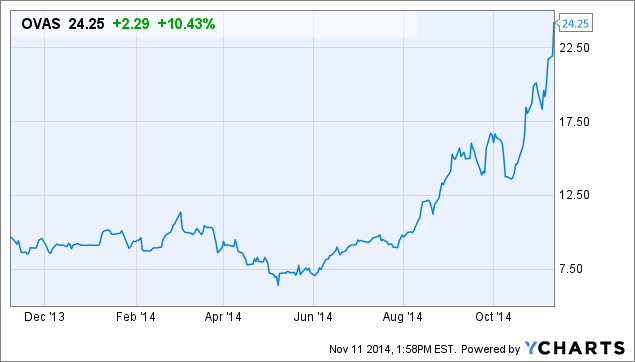