Fein commeted: We have previously noted that it is not as important when exactly in 2014 NEPT’s in-house production will kick off, but that in-house production will kick off in 2014, making it likely for krill oil sales and COGS to start their return towards pre-incident levels. As a reminder, after its only manufacturing plant was destroyed by fire in Nov 2012, the company has been able to maintain a modest level of sales through third party suppliers and margin concessions: $3.7M in this last quarter (May’14) vs. $8.1M in the last quarter prior to the incident (Aug’12), with COGS rising from mid-40% to high-80%. This June, NEPT resumed production of its own krill oil at the newly built Sherbrooke plant, and expects a linear ramp to full production capacity (150 tons/year) in the next three months. While the impact of this milestone will likely not be felt in the current quarter (Aug’14), we believe that the second half of 2014 will see a rise in sales and potentially a fall in COGS towards pre-incident levels. Importantly, with resumed production, we believe that pre-incident sales may represent a revenue milestone to be surpassed rather than just met, due to the following developments of material significance in the last year: (1) NEPT has negotiated royalty settlements with all of its competitors; (2) NEPT has worked to obtain licenses and expects to expand into new territories, specifically Asia and South America. Complementing NEPT’s catalyst calendar and valuation, its prescription krill oil subsidiary Acasti Pharma (ACST; not rated) expects to report topline data from its Phase 2 study in hypertriglyceridemia in September (see below), and later give clarity on a likely end-of-Phase-2 meeting with the FDA and a potential Phase 3 program. Overall, with in-house production rebooted, IP litigations behind, and new sales geographies on tap, we believe that the likelihood of a 2014 inflection point in krill oil sales following the recent 18-month post-incident trough is not yet reflected in the company’s current market valuation”.

According to TipRanks.com, which measures analysts and bloggers success rate based on how their calls perform, analyst Andrew Fein currently has a one-year average return of 4.6% and an 44% success rate. Fein is ranked #1524 out of 3216 analysts. 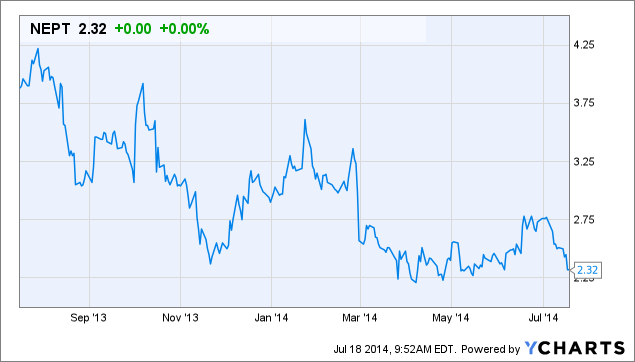