In a research note released today, H.C. Wainwright analyst Reni Benjamin reiterated a Buy rating on La Jolla Pharmaceutical (LJPC) with a $20 price target, following the company second-quarter results. LJPC reported a 2Q14 net loss of ($4.3) MM, or ($0.63) per share, compared to Benjamin’s estimate of ($5.2) MM, or ($0.53) per share.

“In 2Q14, the company announced the development of LJPC-501 in Catecholamine Resistant Hypotension (CRH), and is expected to enter a pivotal trial in early 2015. In addition, LJPC-401 remains on track to enter a Phase 1 trial in iron overload disorders later this year. Finally, the company disclosed that it is also developing LJPC-1010, an orally available formulation of GCS-100, in non-alcoholic steatohepatitis (NASH). Based on the clinical profile to date, the portfolio of diverse assets, the potential to secure an ex- US partnership, and a cash position of $56.6 MM, we believe La Jolla Pharmaceutical represents an undervalued player with significant upside for the long-term investor.”, Benjamin noted.

With regards to the company’s financial position, the analyst noted, “Recently, LJPC completed a secondary offering of approximately 5.4 MM shares at $10.50 per share. In total, the company raised $53.1 MM in net proceeds, which we expect to be used to fund ongoing and future clinical trials. In our opinion, the company has sufficient resources to fund operations until 2H16.” 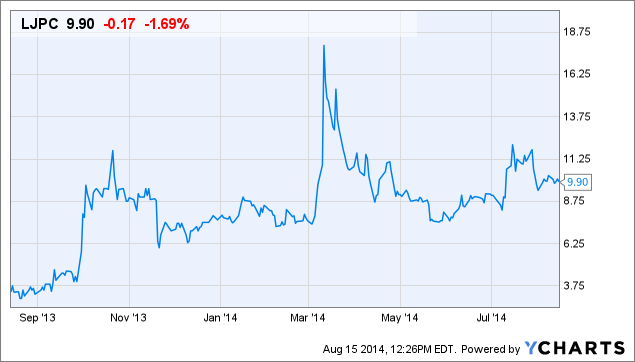