Ramakanth noted, “Accounting for 2Q14 actual financials and adjusting the model, we expect 2014 revenues of €27.4 million and EPS of (€0.22).” The analyst continued, “Management reported that the FDA’s review of the Ablatherm PMA application is active and ongoing. We continue to expect that the FDA decision could come by the end of the year. Given the negative recommendation of the advisory committee panel for the approval of the device, we are not considering any US Ablatherm revenues for now.”

“The company reported sale of one unit each of Ablatherm and Focal One devices during 2Q14. Additionally, management reported a backlog of two Focal One devices at the end of the quarter. As the Focal One device is priced higher than Ablatherm, we expect higher 2014 HIFU related revenues of €7.1 million compared to €5.1 million reported in 2013. We believe the recent French reimbursement approval and inclusion of HIFU based treatment in the European guidelines could potentially help grow the ex-US market. Accordingly, we expect HIFU related revenues to grow to approximately €33.7 million by 2025.”

In closing, the analyst wrote, “We believe, if current burn levels are maintained, the company has sufficient cash to fund operations for the next 12 months. We continue to rate the American Depository Shares (ADS) of EDAP Buy considering the anticipated growth from the European HIFU franchise and the strength of the lithotripsy business.” 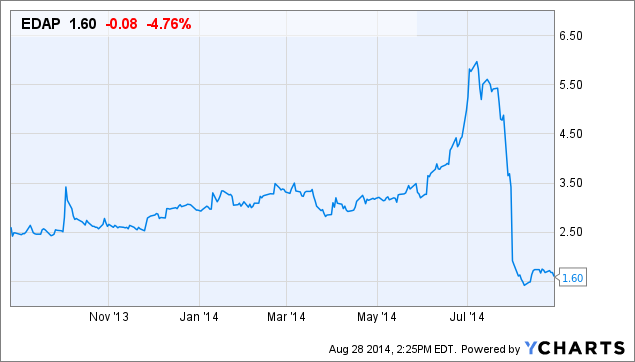