In a research report released August 8, H.C. Wainwright analyst Andrew Fein reiterated a Buy rating on CytRx Corp (CYTR) with a $10 price target, following the release of its second-quarter update and its confirmation of its commitment to an expanded Aldox clinical program within and beyond STS. The company reported a net loss of $15.7M or $0.28 per diluted share. On the operating front, R&D costs were $10.4M (+50% QoQ), driven by higher expenditure supporting the Aldox clinical program, and SG&A costs $2.9M (-7% QoQ). CYTR exited 2Q14 with $102.5M in cash and short-term investments, and no debt.

Fein wrote, “With OS data from the Phase 2 study in front-line STS coming in 2H14 (see below), and an ongoing value-driving Phase 3 study in second-line STS (enrollment expected to complete in 2H14, allowing for data in late-2015/early-2016), the company expects to begin a phase 2b study in second-line SCLC in 2H14, and release preliminary data from Phase 2 studies in GBM and Kaposi’s sarcoma by mid-2015. In our view, while the font-line Phase 2b study does not have strong read through on the ongoing second-line Phase 3 study, it does show that Aldox is an active anti-tumor agent that compares favorably to Dox within the limits of what is clinically demonstrable in STS. If we could point to the most important takeaway from all presented STS therapeutics at the recent ASCO meeting, we would choose the waterfall plots of tumor response from the Aldox Phase 2b study (not seen prior to ASCO; see Figure 1), which show tumor shrinkage in excess of just the qualified response, and in our view serve as further POC in support of Aldox and CYTR’s conjugation technology in general.”

According to TipRanks.com, which measures analysts’ and bloggers’ success rate based on how their calls perform, analyst Andrew Fein has a total average return of 5% and a 59.1% success rate. Fein is ranked #1248 out of 3214 analysts. 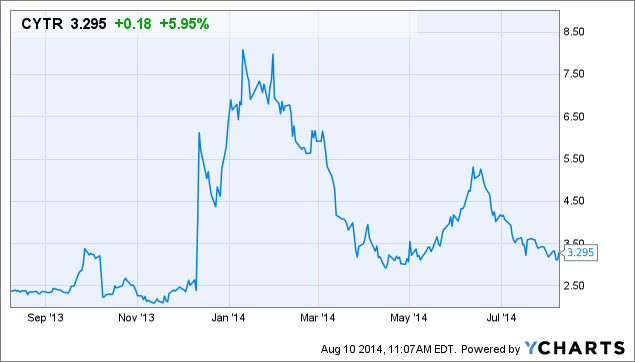