In a research report released today, H.C. Wainwright analyst Swayampakula Ramakanth reiterated a Buy rating on Aeterna Zentaris (AEZS) with a $3 price target, which represents a potential upside of 154% from where the stock is currently trading. The report follows today’s news that Aeterna signed a co-promotion agreement with ASCEND therapeutics to utilize the commercial organizations of both companies to promote ASCEND’s FDA approved Estrogel along with Macrilen, when approved.

Ramakanth commented: “This agreement more than doubles the company’s current commercial structure of 20 sales representatives as ASCEND adds its 35 sales representatives while not increasing the operational expenses substantially. The companies plan to start co-promoting Estrogel during 4Q 2014, ahead of potential Macrilen approval. Note that Macrilen, currently under review by the FDA for its use in Adult Growth Hormone Deficiency (AGHD) diagnosis, has a PDUFA date of November 5, 2014. We believe the mere size of the sales force behind the anticipated Macrilen launch will aid in gaining quicker adoption of the product among the targeted 2,500 endocrinologists and could potentially result in generating higher sales than our current estimates. At this time, we expect risk-adjusted peak sales of $69 million by 2025. With the companies not disclosing financial details of the agreement, we are not making any changes to our financial model”.

The analyst added, “Considering the anticipated boost to the top line immediately from this agreement and potential to become operationally positive by 2018, if not before we continue to believe Æterna Zentaris shares are under valued”. 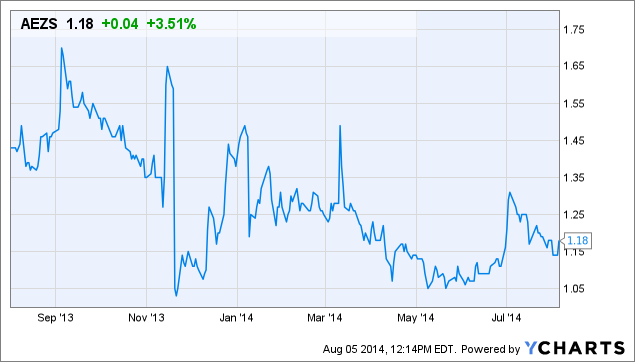