In a report issued today, H.C. Wainwright analyst Swayampakula Ramakanth reiterated coverage on shares of Aeterna Zentaris (AEZS) with a Buy rating and a $3 price target, after the company provided its second-quarter business update. Aeterna reported 2Q14 EPS of ($0.09) compared better than expectations of ($0.14) due to lower than expected operational expenses. Considering Estrogel co-promotion from 4Q14 and adjusting for 2Q14 results, Ramakanth is now expect 2014 EPS of ($0.55) compared to his previous estimate of ($0.53).

Ramakanth noted, “Management has not disclosed any financial terms of the co-promotion agreement to market Estrogel with Ascend. We believe annual US Estrogel sales are in the range of $20-$25 million. Assuming the company will manage approximately 36% of Estrogel commercialization and receive a conservative 30% commission for their contribution, the company could receive a revenue stream of approximately $2.2-$2.8 million during the forecast period, 2015E-2025E”.

The analyst continued, “ZoptEC interim results could fuel further interest. With current study enrollment of230 women, management believes that the study is on target fora first interim look at the completion of 128 events during 1H15. If the current study is successful, we believe Zoptarelin doxorubicin could achieve a peak sales of nearly $55 million for the treatment of advanced endometrial cancer”. 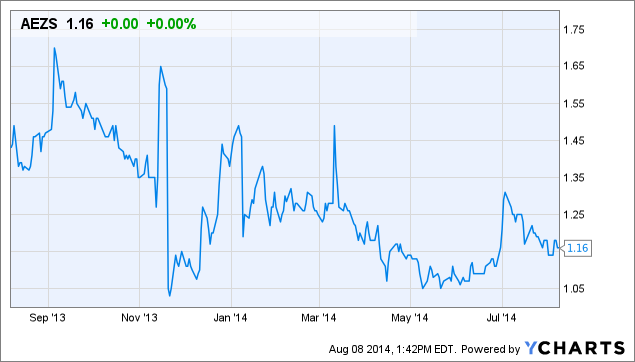