Benjamin observed, “We view this announcement as excellent news for the company and investors alike, as it offers the potential to broaden the labeled indication for its phosphate binder Ferric Citrate (KRX-0502). Currently, there are only therapies available via intravenous or subcutaneous delivery, but no FDA-approved oral formulation for the treatment of iron deficiency anemia in CKD patients exists. If successful, Ferric Citrate could gain entry into the non-dialysis space and extend the addressable patient population from our estimates of 390,000 patients with end-stage renal disease (ESRD) requiring dialysis to an addressable 1.5 million adult Americans with NDD-CKD afflicted with iron deficiency anemia. With a significant cash position of $137 MM, one marketed product, and partnership with JT Torii in Japan, we believe shares of Keryx remain undervalued and represent upside to the risk-tolerant, long-term investor.”

furthermore the analyst said, “This study is a multicenter (nearly 40 sites), randomized, double-blind, placebo controlled trial with a 16-week treatment phase followed by an eight-week, open-label safety extension period (all patients receive Ferric Citrate). According to the study parameters, approximately 230 patients, who have not responded previously to oral iron supplements, will be randomized 1:1 to either the Ferric Citrate or placebo. The study’s primary endpoint is improvement (achievement of 1 g/dL or greater increase) in hemoglobin for the 16-week treatment phase. We believe enrollment could take a year to complete with top-line results possibly by 1H16. The trial’s secondary endpoint will include evaluation of hemoglobin, ferritin, transferrin saturation (TSAT), and serum phosphorous levels. If the results are positive, the company has the potential to file an NDA by 2016.” 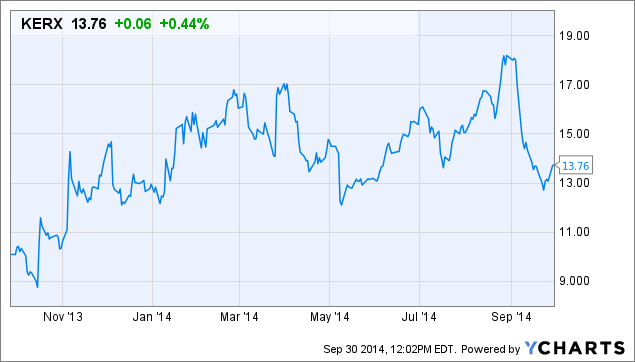