H.C. Wainwright’s healthcare analyst Andrew Fein came out with a few insights on Insmed Incorporated (NASDAQ:INSM), after management gave investors a glimpse of how INSM now views itself at an analyst day in New York. The analyst reiterated a Buy rating and a $30 price target, which implies an upside of 52% from current levels.

Fein noted, “The company recognizes that Arikayce is the shortest path to value, and remains on track for potential launches in the EU and US in 2016 and 2017, respectively. Additionally to Arikayce, and the increasingly interesting INS1009, INSM is looking to expand its pipeline with both reformulations of its existing assets, and acquisition of new assets in orphan pulmonary diseases beyond NTM, CF and PAH. With the fundamentals of the value-driving Arikayce unchanged, and in anticipation of upside from the consolidation of top talent overseeing new orphan programs, we reiterate our Buy rating.”

According to TipRanks.com, which measures analysts’ and bloggers’ success rate based on how their calls perform, analyst Andrew Fein has a total average return of 32.2% and a 63.0% success rate. Fein has a 38.7% average return when recommending INSM, and is ranked #95 out of 3547 analysts. 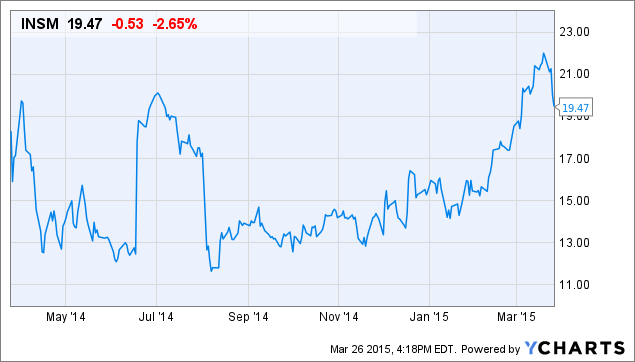