In a research note published today, H.C Wainwright analyst Andrew Fein reaffirmed a Buy rating on Insmed (INSM) with a $30 price target, in light of management’s new plan for Arikayce going forward. The company will now run two Phase 3 studies to support an NDA in NTM, while moving forward by end-2014 with an MAA in NTM and CF based on data in hand.

Fein noted, “Regarding the new NTM program, we highlight to investors the following key observations: 1) despite the push with an MAA, the majority of Arikayce’s value remains tied to the US NTM indication; 2) in addition to the steady pursuit of the refractory NTM population, for the first time, the new Phase 3 program lays out a strategy for the approval of Arikayce in the broader NTM population (NDA and sNDA based on two separate studies; see below); 3) despite the extended timeline, and despite the lower pricing potential dictated by tackling a whole disease, the expansion from the orphan refractory subgroup to the broader NTM population compounds the value proposition, leaving our company valuation and PT unchanged”. The analyst added, “We remain confident that Arikayce will at least reproduce the subgroup culture conversion efficacy observed in Phase 2, thus retaining its ability to mature either into an orphan drug for refractory NTM disease (old value proposition), or into a drug to treat all NTM patients (new value proposition)”.

According to TipRanks.com, which measures analysts’ and bloggers’ success rate based on how their calls perform, analyst Andrew Fein has a total average return of 4.7% and a 55% success rate. Fein has a -28.7% average return when recommending INSM, and is ranked #1351 out of 3203 analysts. 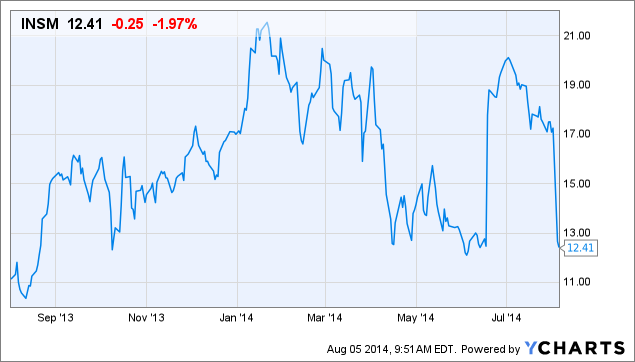