H.C. Wainwright analyst Andrew Fein came out today with an extremely bullish call on shares of ACADIA Pharmaceuticals Inc. (NASDAQ:ACAD), initiating a Buy rating with a price target of $50, which implies an upside of 33.5% from current levels.

Fein stated, “In the often-tenuous world of psycho-therapeutics, we believe that Acadia represents a good long opportunity in the near-to-medium term, and an excellent long opportunity in the distant term. The company’s main value driver, Nuplazid, is aimed at the untapped sub-indication, psychosis in Parkinson’s disease (Phase 3 win in 2013, Breakthrough Therapy designation in 2014, NDA submission pending in 1Q15, potential launch in 1Q16 assuming approval), while also setting its sight on the more lucrative, albeit challenging, Alzheimer’s disease psychosis (Phase 2 readout in 1H16).”

Furthermore, “Aside from the long opportunity, we highlight that catalysts in the next 12 months may present opportunities and trading patterns appealing to short-term investors. Specifically, while we hold no reservations on Nuplazid in Parkinson’s, we note that the following events are likely to create a choppy path to ultimate value: (1) a Nuplazid AdCom panel at the FDA (if any); (2) speculations on launch and market size; and (3) a readout of the high-hurdled Alzheimer‘s study. We believe that Nuplazid’s commercial potential in Parkinson’s alone offers upside to current trading levels, with the Alzheimer’s indication offering a high risk/high reward free call option.”

Analyst Andrew Fein has a total average return of 33.3% and a 64.0% success rate, according to TipRanks.com, which measures analysts’ and bloggers’ success rate based on how their calls perform. Fein is ranked #95 out of 3480 analysts. 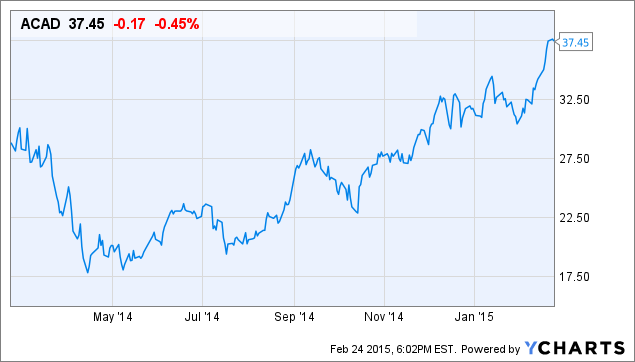