H.C. Wainwright analyst Andrew Fein came out today with some commentary on OvaScience Inc (NASDAQ:OVAS), after the company participated this week in the European Society of Human Reproduction and Embryology (ESHRE), sharing information about its egg precursor (EggPCSM) cell technology and the importance of egg health.

Fein wrote, “Our top takeaway from the company’s symposium at ESHRE was the understated one-slide reference to the launch of the company’s global IVF registry. For each patient, the company is expected to collect over 200 data points spanning their IVF history and 12 months of data post live birth. We recognize that the company may not be able to collect all data points in each case; however, such a widely-cast data net should enable sufficient mining to derisk the treatment in the eyes of physicians and regulators. In our view, this registry should allow the company to eventually approach the FDA with a concrete dataset in lieu of a hard trial.”

The analyst continued, “While it is unclear what size of registry would make the FDA comfortable enough to give a green light to Augment in the US (assuming the current efficacy trend holds or improves prospectively), we believe that a registry of 1K cycles of Augment (as expected by year end) might be enough to at least warrant a first meeting with the FDA to evaluate the next steps. Any such development or incremental clarity over the US regulatory path would likely be a significant catalyst for shares. Last but not least, additionally to its regulatory value, we believe that the global registry also increases the company’s appeal in the eye a potential acquirer with existing or desired presence in the fertility space.”

The analyst maintained a Buy rating on OvaScience with a $100 price target, which represents a potential upside of 172% from where the stock is currently trading.

According to TipRanks.com, which measures analysts’ and bloggers’ success rate based on how their calls perform, analyst Andrew Fein has a total average return of 27.4% and a 71.2% success rate. Fein has a 146.6% average return when recommending OVAS, and is ranked #80 out of 3632 analysts.

All the 5 analysts polled by TipRanks rate OvaScience stock a Buy. With a return potential of 84.1%, the stock’s consensus target price stands at $67.60. 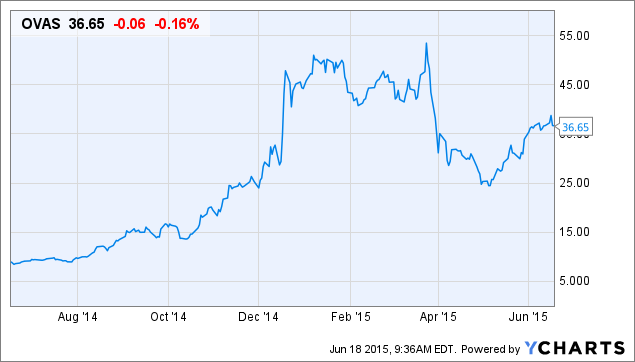