H.C. Wainwright Maintains Buy On Seattle Genetics On The Heels Of Positive Data From Phase 3

In a research note published today, H.C. Wainwright analyst Andrew Fein maintained a Buy rating on Seattle Genetics (NASDAQ:SGEN) with a $65 price target, as the company reported a topline win in its AETHERA study, evaluating Adcetris as consolidation therapy in patients at risk of relapse following an autologous stem cell transplant (ASCT).

Fein observed, “The study, originally designed to show a HR of 0.67, exceeded expectations by reaching a HR of 0.57 (p=0.001), translating to a 75% improvement in overall progression-free survival (PFS). The company noted that an interim analysis of overall survival (OS) (secondary endpoint) did not reveal any statistically significant benefit to date, which may or may not be related to: (a) the study not being designed to capture an OS benefit; and (b) the majority of patients from the placebo arm moving to receive Adcetris following disease progression in the study (the next analysis of OS is schedule for 2016). The company expects to present an analysis of the progression data and granularity on safety at ASH (Dec 6-9, San Francisco), and submit its sBLA for Adcetris as post-ASCT consolidation therapy in HL in 2015.”

The analyst continued, “We look forward to full AETHERA data at ASH, and expect to focus on the following: (1) actual PFS data, such as median time to progression, and time profile of PFS curves (curve separation and the length of the separated curve tails); (2) median number of cycles given, in the overall Adcetris arm and in any significant subgroups; (3) performance of the placebo cohort in comparison with historical rates of relapse in highrisk post-ASCT (~50%); and (4) color on treatment discontinuations, and any SAE (though management noted several times that the safety profile was consistent with the current label). Also of interest at ASH, we believe, will be any efficacy analyses based on population risk stratification or subgroups, which may fine-tune efficacy (or safety) and thus potential use. Beyond PFS, we acknowledge that the OS analysis in this study may be compromised by the post-progression Adcetris given disproportionally to the placebo arm, though later retrospective OS analyses with censoring of such placebo patient may well reveal positive survival trends. Importantly, independently of OS, we have confidence in the strength of the PFS data to singlehandedly support label expansion in this population where ASCT is the last curative measure and preventing post-ASCT relapse is the primary therapeutic goal.”

According to TipRanks.com, which measures analysts’ and bloggers’ success rate based on how their calls perform, analyst Andrew Fein has a total average return of 9.8% and a 51.6% success rate. Fein has a 11.8% average return when recommending SGEN, and is ranked #728 out of 3310 analysts. 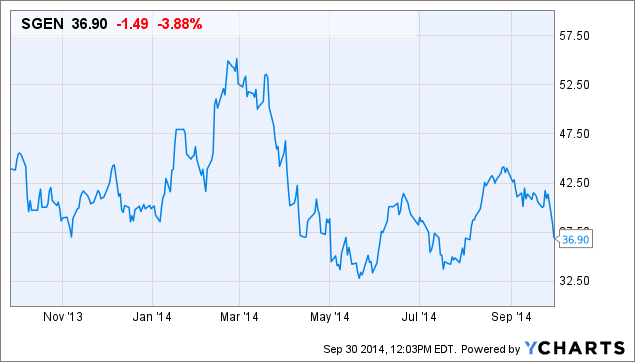