In a research note released yesterday, H.C. Wainwright analyst Andrew Fein maintained a Buy rating on Catalyst Pharma Partners (NASDAQ:CPRX) and raised his price target to $13 (from $5) ahead of the company’s release of its topline data.

Fein wrote, “With a successful orphan asset in hand, CPRX management would be poised to: (1) maximize benefit to LEMS patients, by beginning to educate physicians and patients in anticipation of a potential 2016 launch; and (2) maximize returns to investors, by seeking Firdapse pricing in line with today’s orphan drug market. Pending positive topline data this month, we believe that the company will likely debut Firdapse and kick off an education/awareness campaign at a medical meeting this autumn (thematically likely at the AANEM Annual Meeting, Oct 29 – Nov 1, Savannah, GA), followed by a pre-NDA meeting with the FDA in 4Q14, completion of a rolling submission by mid-2015 (as per Breakthrough Therapy Designation protocol), opening the way to a potential approval in 4Q15, and commercial launch in 1Q16.

The analyst continued, ‘Importantly, we believe that CPRX retains ample room for orphan pricing of Firdapse in the US. While to date, consensus has maintained a projected price of Firdapse under $100K/ year, we believe that with positive orphan data in hand CPRX may appropriately undertake to double on this consensus. In perspective, we view orphan drugs divided into two clusters: (a) cancer indications (small molecules and some antibodies; typically defined and short treatment duration), associated with a pricing range of $75-150K/ year; and (b) metabolic indications (ERTs and some small molecules, typically maintenance therapies), associated with pricing above $225/ year. At this time, we conservatively position our Firdapse price in between these two clusters, making CPRX a more underappreciated stock ahead of pending topline data (as well as a relatively cheap orphan M&A target), and leading to our new $13 PT.”

According to TipRanks.com, which measures analysts’ and bloggers’ success rate based on how their calls perform, analyst Andrew Fein has a total average return of 13.3% and a 65.5% success rate. Fein is ranked #510 out of 3298 analysts. 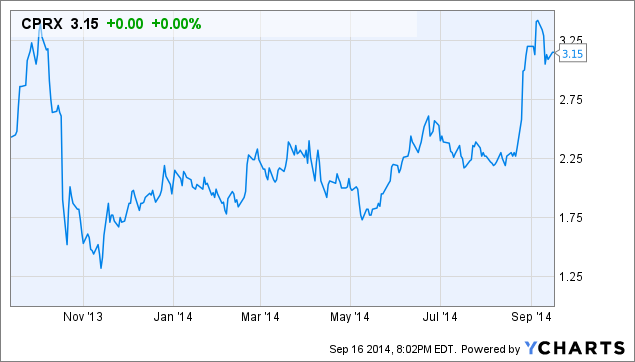