In a research report issued today, H.C. Wainwright analyst Swayampakula Ramakanth maintained a Buy rating on Aeterna Zentaris (NASDAQ:AEZS) with a price target of $3.00, as the company’s lead endocrinology drug candidate, Macrilen, a diagnostic for Adult Growth Hormone Deficiency (AGHD), is expected to receive an FDA approval decision by November 5.

Ramakanth wrote, “Currently approved diagnostics are either injected or infused while Macrilen is administered orally, making it less resource-intensive. The drug exhibits a tolerable safety profile (unpleasant taste and diarrhea) and efficacy (with 82% sensitivity, 92% specificity, and a 13% misclassification rate). Management characterized their ongoing pre-approval discussions with the FDA, including the drug label, as positive and constructive in a conversation we had last week. According to the management, pre-approval plant inspections were also successful. Taken together, we believe Macrilen could receive approval by the PDUFA (Prescription Drug User Fee Act) date. The company believes, if a positive decision is rendered, Macrilen could be launched in 1Q15, inline with previous guidance.”

The analyst concluded, “Considering the anticipated boost to the top line from the Macrilen approval and the potential to become operationally positive by 2018 (if not earlier), we continue to believe Æterna Zentaris shares are undervalued. We are maintaining our 12-month price target of $3.00 per share based on the average of two valuation methods: price-sales multiple (7x 2025 sales estimate discounted 20%) and DCF (0% terminal growth and 15% discount).” 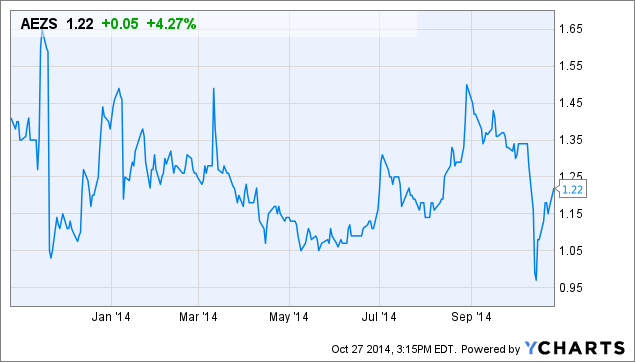