Fein commented: ““False dawn for cystic fibrosis disease modifiers?” A review by this title ran online on Nature just ahead of the NACFC 2014 meeting (Nature Reviews Drug Discovery. 13: 713–714; 2014). The piece highlighted the modest FEV1 benefit of the 770/809 combo, and also some of the provocative preclinical science from Vertex-independent labs suggesting negative interaction between 770 and 809 and functional equivalence between 809 and 661. Overall, we disagree with the review’s title: we believe that we are in fact at a true dawn of CF therapeutics, which includes the Vertex franchise, as well as multiple other potentiator and corrector programs that have improved on the original Vertex science, as well as agents with completely new mechanisms of action which could be complementary to potentiators and correctors or outright replace them. In line with this view, and following up our NACFC 2014 preview from two weeks ago, below we are highlighting what we regard as the most important themes emerging from this year’s meeting.”

According to TipRanks.com, which measures analysts’ and bloggers’ success rate based on how their calls perform, analyst Andrew Fein has a total average return of -1.2% and a 32.4% success rate. Fein has a 30.7% average return when recommending VRTX, and is ranked #2419 out of 3326 analysts. 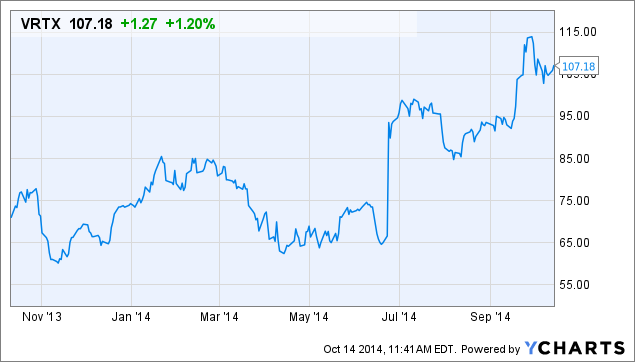