In a research report issued today, H.C. Wainwright analyst Andrew Fein maintained a Neutral rating on Vertex Pharmaceuticals (NASDAQ:VRTX) with an $85 price target, as the FDA’s Pulmonary-Allergy Drugs Advisory Committee voted 13-2 in favor of approving Kalydeco for the treatment of patients over age 6 carrying an R117H CFTR mutation.

Fein commened: “we struggle to see how any of activity surrounding the R117H sNDA could be objectively or subjectively extrapolated to the F508del NDA (Kalydeco/809), because: (1) R117H is more of a disease-associated mutation than a disease-causing mutation, unlike F508del (this affects disease onset and severity); (2) the R117H study was too small to begin to focus on identifying response biomarkers (a regulatory direction feared by 809 bulls), in fact the FDA and panel found it difficult enough to tackle the patient subgroups already on the table, such as age and ppFEV1 severity; and (3) the R117H study failed its primary endpoint and several of its secondary endpoints, while TRAFFIC/TRANSPORT won their primary endpoint with statistical significance in the overall population as well as in subgroup analyses. Overall, and importantly, despite the lack of any read-through from yesterday’s R117H panel, we nonetheless believe that the Kalydeco/809 combo will likely be approved in F508del (with or without a panel). However, we continue to maintain that current trading levels already reflect the competitive dynamics and challenging economics that the combo is likely to face in the medium term, once the post-approval honeymoon period of patient and investor excitement ends.”

According to TipRanks.com, which measures analysts’ and bloggers’ success rate based on how their calls perform, analyst Andrew Fein has a total average return of 4.4% and a 44.1% success rate. Fein has a 30.7% average return when recommending VRTX, and is ranked #1193 out of 3337 analysts. 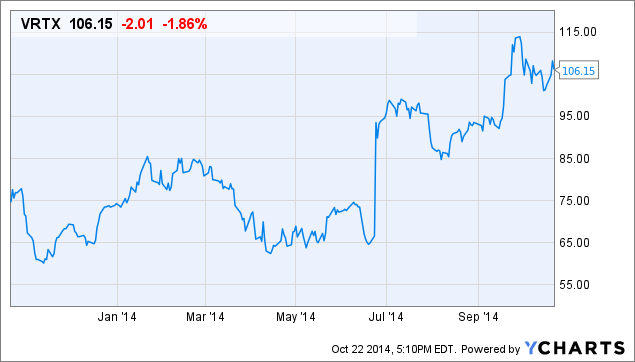