The analyst rates Oxigene shares a Buy with a $6 price target, which represents a potential upside of 266% from where the stock is currently trading.

Benjamin commented: “Based on our discussion, we believe this year harbors multiple near-term value drivers, with FDA feedback on the design of a pivotal Pt-resistant ovarian cancer trial (expected in 2Q15) at the top of our list. In a best-case scenario, the FDA would green-light a trial utilizing PFS as its primary endpoint, without requiring a statistically significant benefit in OS. Given that Avastin + chemotherapy was approved last November without providing a significant OS improvement, we believe a non-inferiority study evaluating Zybrestat + Avastin versus Avastin + chemotherapy, competing on an improved quality of life (vs. efficacy) would represent a favorable design for OXiGENE.”

The analyst continued, “With the enrollment of the company’s gastrointestinal neuroendocrine (GI-NET) trial expected to complete in 4Q15, we anticipate interim data may be available before year end, and that early biomarker data could be available by the ASCO timeframe. OXiGENE also plans to initiate a Phase 1 study of OXi4503 in AML in 3Q15.”

Bottom line: “With feedback from regulators expected in 2Q15, a pipeline of clinical and pre-clinical oncology assets, and a cash position of $30 MM (pro forma), we believe OXiGENE represents an undervalued player with significant upside for the long-term investor.” 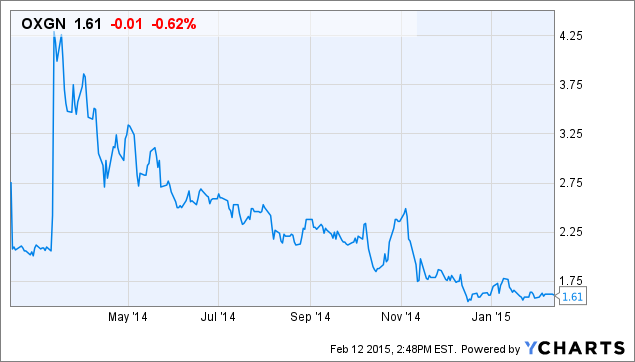