In a research report published on Thursday, Brean Capital analyst Tom Forte weighed in with his opinions on Groupon Inc (NASDAQ:GRPN) after the company officially became the latest consumer technology company to launch an app for Apple Inc. (NASDAQ:AAPL)’s Apple Watch. The analyst maintained a Buy rating on the stock with a price target of $11.00, which represents a potential upside of 105.2% from where the stock is currently trading.

Forte wrote, “We believe this strengthens Groupon’s mobile story, which already was compelling, in our view. We consider the shares to be oversold at current levels – down more than 35% since trading at a recent high of $8.30 in late February 2015. We recommend investors take advantage of this daily-deals type discount and purchase shares.”

Furthermore, “We are quick to point out that neither Amazon nor Google have made any overtures toward Groupon, and we are just highlighting the fact that we believe GRPN shares offer significant value here given the sharp drop in share price since February.”

Out of the 20 analysts polled by TipRanks, 11 rate Groupon stock a Hold, while 9 rate the stock a Buy. With a return potential of 62.1%, the stock’s consensus target price stands at $8.69. 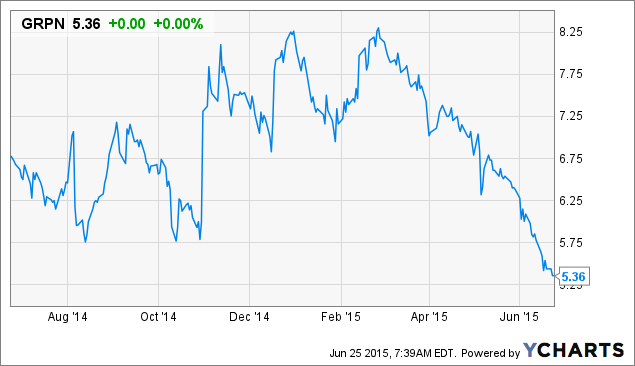