In a research report issued today, Griffin Securities analyst Keith Markey reiterated a Buy rating on Unilife (NASDAQ:UNIS) with a $13.50 price target, which represents a 409% upside from where the stock is currently trading.

Markey wrote, “Sanofi has agreed to source wearable injectors exclusively from Unilife over the next 15 years and possibly longer with a contract extension. The deal, which gives Unilife the right to supply other clients as long as Sanofi’s rights are protected, came with an undisclosed upfront payment and customization contracts worth approximately $50 million over time. Moreover, the contract is expected to begin generating commercial sales of devices to Sanofi this fiscal year. Presently, the multinational drug company has five to ten molecules in its R&D pipeline that fall into the category of “large dose volume drugs’ and are likely to be commercialized. Based on an average volume of five million doses per drug per year at peak market penetration and a price of $25 per wearable injector, launch of just eight such agents will generate almost sufficient net income over the life of the contract to justify our $13.50 price target.”

Markey continued, “We believe Sanofi has one drug that stands out – it has developed a monoclonal antibody against an enzyme called PCSK9 to treat patients with high cholesterol levels who are not adequately treated by today’s medicines. An agreement for Unilife’s wearable injectors has been the subject of speculation since late July when Sanofi and its partner Regeneron acquired a voucher to gain a ‘fast track’ review of their NDA and thereby gain FDA approval prior to the nearest competitor, Amgen, probably in the June quarter. Given the size of the hypercholesterolemia market, this medicine is the keystone of the wearable injector deal, in our opinion.” The analyst added, “Based on trading activity for UNIS shares, it is obvious that Wall Street doesn’t understand the value of Unilife’s 15-year, single-source commercial supply contract with Sanofi for wearable injectors. The stock’s price increased about 25% on the announcement, but then gradually fell, closing at $2.69 yesterday. The downward pressure has continued into today. Yet, this is Unilife’s “game changer,” in our opinion, for it will likely have a major impact on the Company’s near-term financial performance and should vault the Company into the highest echelon of suppliers to the pharmaceutical industry. Indeed, the deal may be considered a signal to the pharmaceutical industry that Unilife is a reliable supply partner. This should come as no surprise, given the breadth of the Company’s product line and commitment to quality and performance exhibited over the years. Note that the new deal is not a one-time event either, since Unilife already has a wearable injector supply contract with Astra Zeneca. More deals are likely, as there are over 180 biologics under development industrywide in the fields of cancer and autoimmune, hematological, and genetic disorders that may require a wearable injector for administration.”

According to TipRanks.com, which measures analysts’ and bloggers’ success rate based on how their calls perform, analyst Keith Markey has a total average return of -28.1% and a 20% success rate. Markey is ranked #3220 out of 3319 analysts. 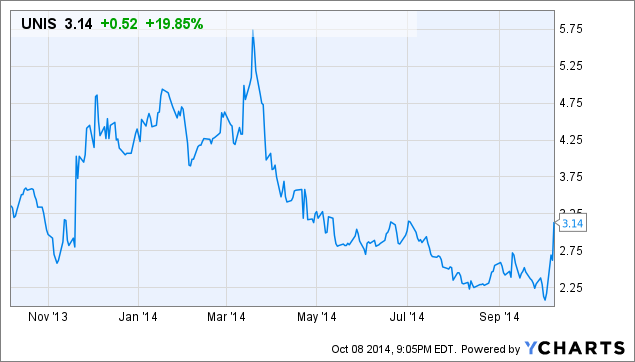