In a research report published Friday, Griffin analyst Keith Markey reiterated a Buy rating on shares of ZIOPHARM Oncology Inc. (NASDAQ:ZIOP) with a price target of $21, after the company and Intrexon Corp (NYSE:XON) amend their Exclusive Channel Collaborations in oncology and graft-versus-host disease. Shares of ZIOPHARM are currently trading at $5.69, up $0.20 or 3.64%.

Markey wrote, “We think Ziopharm is now a more attractive investment, since it will receive a larger share of the profits from any products it sells. The number of common shares issued upon conversion of the preferred will vary over time, due to the dividend that will be paid in kind and the conversion price. For instance, at a common price of $5 per share, the $120 million preferred would convert into 24 million common shares today, which would increase the number of ZIOP common outstanding by 18.2%. In mid-2021, the stated value of preferred would be $218 million, due to the dividends paid in kind, but only 8.4% more common would be issued if the conversion price has risen to $20. Obviously, the number of common to be issued and the conversion price are inversely proportional.”

Out of the 5 analysts polled by TipRanks, 1 rate Ziopharm stock a Buy, 3 rate the stock a Hold and 1 recommends a Sell. With a return potential of 152%, the stock’s consensus target price stands at $14.00. 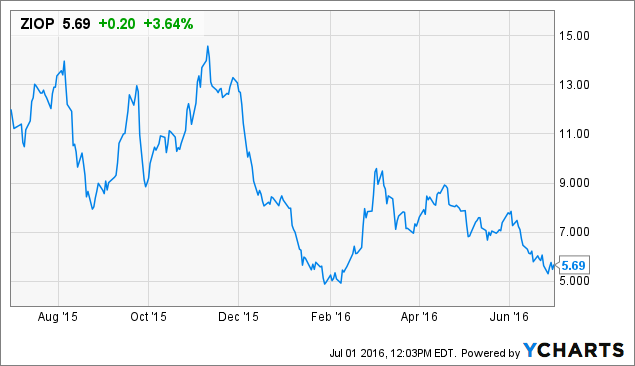